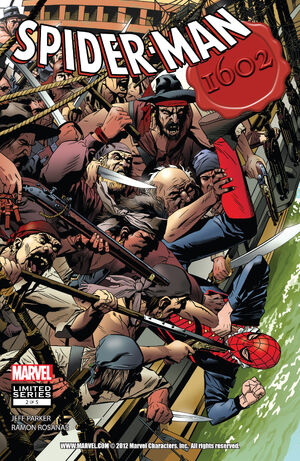 On the high seas Peter learns the ropes aboard a sailing vessel, and the superstitious crew learn that their new powder monkey is no ordinary sailor. The real danger at sea comes when the Jolly Roger is hoist from the approaching ship of Captain Fiske, feared around Europe as The King's Pin!

Retrieved from "https://heykidscomics.fandom.com/wiki/Spider-Man_1602_Vol_1_2?oldid=1453554"
Community content is available under CC-BY-SA unless otherwise noted.