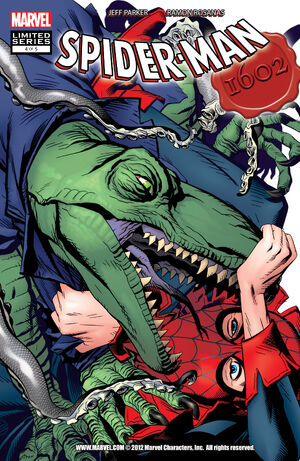 FROM THE BESTSELLING MINISERIES ORIGINALLY CREATED BY NEIL GAIMAN! Peter travels to Venice in search of his new love, but instead finds that Osbourne is still alive...and more dangerous than before. Thanks to the hellish lab of Octavius, this century now has a Green Goblin - bent on revenge! THE FANTASTIC JEFF PARKER AND BREAKOUT ARTIST RAMON ROSANAS BRING THIS AMAZING WORLD TO LIFE!

Retrieved from "https://heykidscomics.fandom.com/wiki/Spider-Man_1602_Vol_1_4?oldid=1453556"
Community content is available under CC-BY-SA unless otherwise noted.