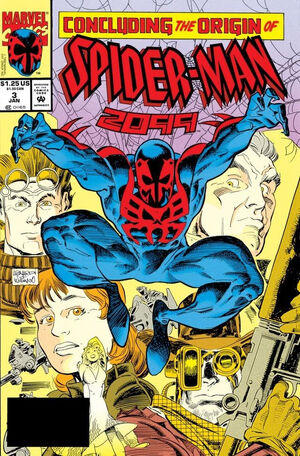 Miguel O'Hara continues to relate the strange story of his origin as the Spider-Man of 2099 to his holographic digital assistant, Lyla. Miguel had just managed to get the drop on Venture, a cyborg Elite sent by Alchemax to track down the mysterious Spider-Man who had escaped from their laboratory. Before the battle can begin in earnest, a band of Thorites insert themselves between Spider-Man and Venture.

Thou art an enemy of the harbinger of Thor! That makes thee our enemy as well!
— Thorites

Only Miguel knew what Venture was capable of, and knew enough to be afraid. As Venture effortless tossed the attacking Thorites aside, Venture continued to threaten Spider-Man.

As he lunges at Venture, Spider-Man says he just wants to be left alone. Venture dispatches the inexperienced Miguel as easily as he had the Thorites. With his right arm completely "nerve-numbed" by Venture's rod, he knows he has no chance. The last time Miguel was in a fight, he was six years old, and badly beaten; he has no chance against Alchemax's top gun. Miguel is trying to decide between buying time to heal and genuinely surrendering when a young Thorite dressed as Balder rushes Venture from behind. His patience gone, Venture throws the youth to ground and impales him.

Enraged, Miguel again rushes the cyborg, this time using his spider-powers to dodge Venture's attacks. Miguel starts to come to his senses: so far Venture's been using his fearsome reputation and incessant talking to keep Miguel distracted, but Miguel needs to carry out his original plan. Only by backtracking through his own apartment can he be certain the Spider-Man's heat trail can't be associated with Miguel O'Hara. Venture follows after the apparently fleeing Spider-Man, passing Gabriel O'Hara on the way back to Babylon Towers.

Spider-Man races up the elevator shaft a split second before Venture rattles it with explosive blasts from his cannon, and is only meters ahead of Venture when he breaks into his apartment. "Lyla, listen! I want you to point there," Miguel gestures to the broken window, "and repeat after me: 'There was a horrible man in black! and he went through there!'" The Spider-Man is through the window just as Venture enter the apartment. Sure enough, Lyla repeats as she is told and Venture takes the ditsy digital assistant for her word.

Venture pursues Miguel through the the city on his rocket-boots, getting tired of firing near-miss "warning shots" and wondering if bringing Spider-Man back in one piece is really worth the trouble. Miguel manages to circle around and blindside Venture, but the cybernetic hunter soon recovers an entangles the hero in a molecularly dense body wrap. With the spider caught in this web, Venture has no trouble bringing him back to Alchemax.

Back at Miguel's apartment, Gabe returns to check in on his brother. He's obviously worried about the exploded elevator, shattered window, and door that's been ripped from its hinges, but Lyla is little help in figuring out the strange scene.

Meanwhile, Venture calls Tyler Stone to inform him of the catch. Unfortunately for Venture, Miguel chooses just this time to cut himself free with the talons on his fingers and toes. Miguel uses those same talons to take out one of Venture's rocket-boots. With the pair wrestling in free-fall, Venture has truly run out of patience, and decides those talons would be easier for Alchemax to examine once he rips off Spider-Man's arm. They're both surprised when webbing sprays out of Spider-Man forearm, blinding the cyborg.

The two crash into traffic, giving Spider-Man a brilliant idea: The magnets that keep the maglev cars aloft can also be used to repell Venture's metallic body into the next county. Flipping the car with superhuman strength, Miguel manages to rid Venture of his cannon, but the hunter remains rooted in place with his rod. The two brawl, and Miguel manages to immobilize Venture by tearing away half of his robotic leg with the talons on his feet. When the cannon, drawn back by the magnetic harness on Venture's back strikes the cyborg hard from behind, Spider-Man uses the opportunity to drive the electrified rod into the exposed wiring in venture's foot. Venture dies in a pyroclasm of burning flesh and circuitry.

As Miguel finishes relating his tale to Lyla, there's a serious knock at the door. It's Tyler Stone, demanding to speak to Miguel about Spider-man.

Retrieved from "https://heykidscomics.fandom.com/wiki/Spider-Man_2099_Vol_1_3?oldid=1510248"
Community content is available under CC-BY-SA unless otherwise noted.