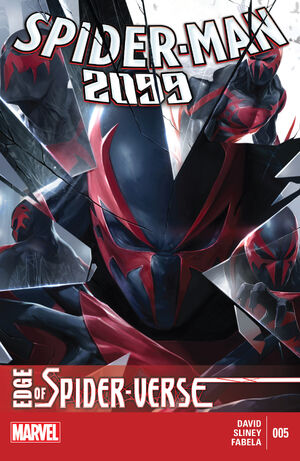 Holy crap! I know him! That's Morlun! But... but he's dead! History says that he's dead! How the hell is he alive and how can he be killing another me?! The pain... it's overwhelming. All I can do not to fall over... This is insane! I don't understand any of this! He stands there for what seems forever but couldn't be more than a second or two. And I could be wrong. I could be imagining it. But he looks... Afraid. And then, just like that, the portal's gone, and I'm alone on the roof... with a body that isn't even recognizable as me anymore. I've got to stash this somewhere, and then... I've gotta find Peter Parker.

• Morlun is hunting spiders of all kinds, across all dimensions and all times.

• Spider-Man 2099 co-creator Rick Leonardi returns for this landmark issue that will take you to the EDGE OF SPIDER-VERSE!

Retrieved from "https://heykidscomics.fandom.com/wiki/Spider-Man_2099_Vol_2_5?oldid=1505843"
Community content is available under CC-BY-SA unless otherwise noted.