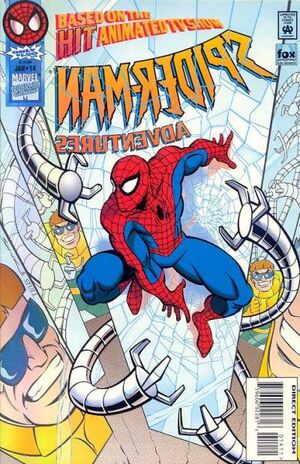 In an attempt to draw out Spider-Man for revenge,Dr. Octopus escapes prison and assaults a Marvel theme park where Peter happens to be on a date with MJ.

Appearing in "Into the Mystic"Edit

Synopsis for "Into the Mystic"Edit

Peter has his fortune told, and his past is reminisced.

Also features a back up story with different art work.

Retrieved from "https://heykidscomics.fandom.com/wiki/Spider-Man_Adventures_Vol_1_14?oldid=1710997"
Community content is available under CC-BY-SA unless otherwise noted.