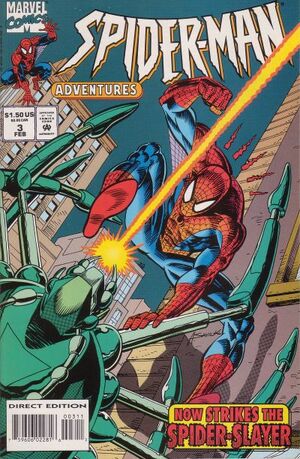 Spider-Man is being ambushed by several flying explosive robots, sent by Spencer Smythe to measure the wall-crawler's abilities. The robots attempt to destroy Spider-Man, but he manages to stop them. Norman Osborn is annoyed at Spencer for his failure. However, Spencer reassures him by showing him his Black Widow Spider-Slayer robot, which he plans to use to capture Spider-Man. After Osborn leaves, Spencer shows his son Alistair why he is working for Osborn. Osborn is offering to build a hoverchair for Alistair if Spencer successfully destroys Spider-Man. At the same time, Osborn visits the Kingpin, confirming that nobody suspects the crime lords' involvement. The Kingpin is adamant that Spider-Man must be destroyed, or else he will take over Oscorp.

Later, Peter Parker is sent by J. Jonah Jameson to serve as photographer at a charity ball, which is being hosted by Felicia Hardy's mother at his home. There, Felicia socializes with Flash Thompson, but ditches him to dance with Peter. Flash and Harry Osborn leave the party, and Flash puts on a Spider-Man costume to intimidate Parker. Spencer's Seeker robots spot Flash in the costume and mistake him for Spider-Man. As Flash enters the building again, Spencer sends the Black Widow to the charity ball. Just as Peter and Felicia finish their dance, "Spider-Man" arrives and threatens him. The Black Widow enters the penthouse apartment and kidnaps Flash, but in the confusion, Peter attaches a Spider-Tracer onto the robot.

The Black Widow takes Flash back to Oscorp. Eddie Brock, also en route to Oscorp for an interview with Otto Octavius, spots the Slayer with "Spider-Man" and takes several pictures, before returning to the Daily Bugle to break the story. At Oscorp, Spencer discovers Osborn's alliance with the Kingpin. Just as Spencer notices the Spider-Tracer on the Black Widow, the real Spider-Man arrives to rescue Flash. Spencer reactivates the Black Widow, which battles Spider-Man. When Osborn fails to destroy Spider-Man with a Seeker, a fire breaks out.

Meanwhile, Brock arrives at the Bugle entrance and brags to fellow newsmen from WBLZ-TV about his witnessing the capture of Spider-Man by a robot, before heading inside. The TV newsmen then rush to Oscorp to cover the story for themselves.

Back at the burning Oscorp lab, Norman takes Alistair to safety, while Spencer opts to stay and fight Spider-Man using the Black Widow. However, as the Widow is defeated, Spencer seemingly perishes in the explosion. Spider-Man escapes with Flash, both realizing that Felicia will be angry with them, due to abandoning her at the party, and for the Spider-Man costume stunt, respectively.

The next morning, Jameson berates Brock after his "headline of the decade" for the Bugle's early edition is exposed as a lie by WBLZ-TV, and promptly fires him. At the smoldering remains of the Oscorp lab, the Kingpin approaches Alistair, who is grieving after his father's demise. Kingpin offers a laboratory for Alistair to use to construct more Spider-Slayer robots to get revenge on Spider-Man.

Retrieved from "https://heykidscomics.fandom.com/wiki/Spider-Man_Adventures_Vol_1_3?oldid=1710704"
Community content is available under CC-BY-SA unless otherwise noted.