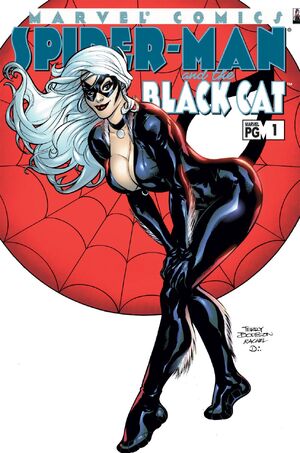 Appearing in "The evil that men do Part 1: What's new pussycat?"Edit

Synopsis for "The evil that men do Part 1: What's new pussycat?"Edit

Spider-Man is looking for a missing woman named Tricia and investigating the death of Donald Phillips, an honor roll student who died from a heroin overdose, despite a lack of evidence that he had ever used heroin. Spider-Man confronts a drug dealer, and learns of Mr. Brownstone (a name that is itself a slang term for heroin), who is rumoured to molest teenaged boys, and a lackey, Hunter Todd.

The Black Cat, also looking for Tricia, meets up with Spider-Man. The two confront Hunter, whose girlfriend dies of a drug overdose. And the phone call which Hunter made earlier, the caller Mr. Brownstone himself hung up the phone before telling Spider-Man he is the one who made both of them overdose.

Retrieved from "https://heykidscomics.fandom.com/wiki/Spider-Man_Black_Cat_Vol_1_1?oldid=1725158"
Community content is available under CC-BY-SA unless otherwise noted.