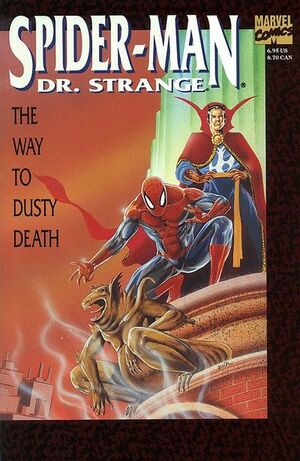 But maybe the only real way to honor the dead is by making the most of your life, whether it lasts a few fleeting years... ...or a swiftly-elapsed century. I'll give it a shot, Uncle Ben. For you.

Appearing in "The Way to Dusty Death"Edit

Synopsis for "The Way to Dusty Death"Edit

While reminiscing the death of Gwen Stacy, Spider-Man chanced upon Melinda Morrison committing suicide. Though saved, Melinda fought against him.

Retrieved from "https://heykidscomics.fandom.com/wiki/Spider-Man_Dr._Strange_The_Way_to_Dusty_Death_Vol_1_1?oldid=1453669"
Community content is available under CC-BY-SA unless otherwise noted.