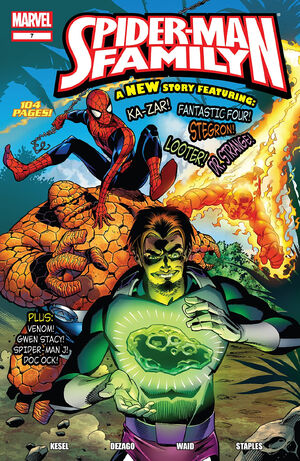 The Looter! This guy found a meteorite that gave him enhanced speed and strength, and the misconception that he’s a genius (he's actually dumber than dirt).

So WHY is he such a pain to Spidey and the FF??? Well, obviously it…oh, wait. I can’t tell you why. Read and find out!

This special issue is brought to you by Mr. Kesel, DeZago and Waid, who take you on an adventure that spans their buddy Mike Wieringo’s favorite places in the Marvel U!

Retrieved from "https://heykidscomics.fandom.com/wiki/Spider-Man_Family_Vol_1_7?oldid=1723538"
Community content is available under CC-BY-SA unless otherwise noted.