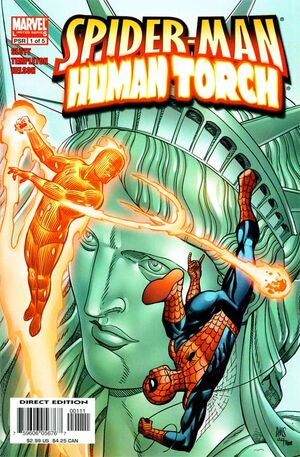 Johnny hires Peter to take pictures of him instead of Spider-Man in order to build his rep. When he is busy with some bank robbers, Spidey's sense goes off and he finds Paste Pot Pete lying in wait to ambush Johnny. When the villain reveals his name to Spider-Man, Peter laughs so hard that the evil doer slinks off and resolves to change his name. After Johnny finishes the bank robbers he gets the idea to fly over to the Latverian embassy to single-handedly take on Dr. Doom since that will make a great front page photo. Doom freezes Johnny in a large chunk of ice and Spidey thinks fast about how he can rescue him. He tells Doom he has reconsidered Doom's partnership offer the first time they met and he now thinks it's a good idea. Doom demands he kneel and Spidey's automatic camera snaps the picture. Spidey asks Doom for the favor of polishing off the Torch and Doom agrees. Spidey breaks off the hunk of ice and swings away with it, Doom's curses ringing in his ears. Spidey frees the Torch, but Johnny's hair has snapped off, and Peter gets the picture. He thinks J.J.J. is really happy about the embarrassing picture when the skinflint gives him a bonus, but when he gets the next day's Bugle edition he realizes Jonah was happy about the photo of Spidey kneeling in front of Dr. Doom with the headline "Spider-Man and Dr. Doom in cahoots."

Retrieved from "https://heykidscomics.fandom.com/wiki/Spider-Man_Human_Torch_Vol_1_1?oldid=1720437"
Community content is available under CC-BY-SA unless otherwise noted.