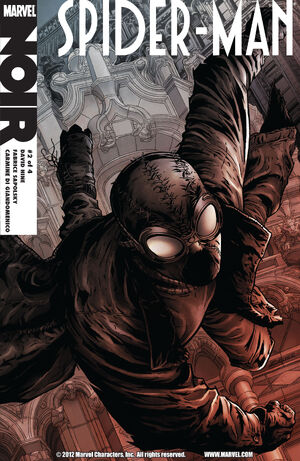 With great power, come great responsibility…and a leather overcoat, and a revolver. It’s Spider-Man as you’ve never seen him before! Writers David Hine and Fabrice Sapolsky and artist Carmine Di Giandomenico descend into the seamy, trash-strewn underbelly of Depression-era New York, and soar to the bloated heights of corruption and greed, to tell the unfamiliar story of Peter Parker, a conscientious but powerless young man given the ability to take on the Goblin’s mob! Will the crusading photojournalist Ben Urich and the slinky femme fatale.

Retrieved from "https://heykidscomics.fandom.com/wiki/Spider-Man_Noir_Vol_1_2?oldid=1453700"
Community content is available under CC-BY-SA unless otherwise noted.