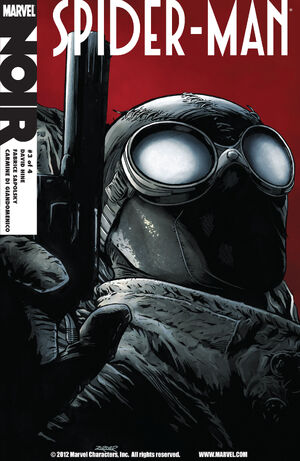 Enough of this! I want this freak's head in a jar!

Young Peter Parker’s been given the power – but does he have what it takes in gritty 1930s New York? There’s only so much a kid like Peter can do against corrupt city politicians and slick gangland bosses. But when he gets unexpected inside info on the Goblin’s dirty dealings, it’s the chance of a lifetime for the Spider-Man to clean up the town!

The cover says one month, but the Indicia says another

Retrieved from "https://heykidscomics.fandom.com/wiki/Spider-Man_Noir_Vol_1_3?oldid=1453701"
Community content is available under CC-BY-SA unless otherwise noted.