Start a Wiki
Part of the 'Clone Saga' event 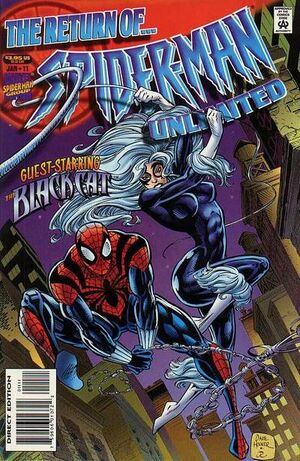 Spider-Man. Ben Reilly. Peter Parker. Hero. Felicia Hardy. Criminal. What happens... when you can't tell which is which... and the mask becomes... the real you?

Appearing in "The Skull Jackets"Edit

Synopsis for "The Skull Jackets"Edit

Retrieved from "https://heykidscomics.fandom.com/wiki/Spider-Man_Unlimited_Vol_1_11?oldid=1535526"
Community content is available under CC-BY-SA unless otherwise noted.