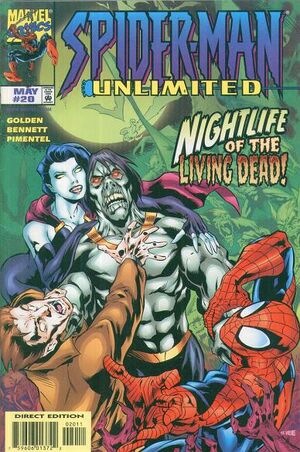 There you are, you handsome devil! Now put the nice motorcycle down; you could poke your eye out with that thing!

Appearing in "A Long Way Till Dawn"Edit

Synopsis for "A Long Way Till Dawn"Edit

The Zombie wanders through the streets of Greenwich Village and attacks several pedestrians. After swatting two of them aside, he drags another one away with him.

In Times Square, Pete and M.J. are out having a good time. Pete is distracted however by recent reports of several missing persons. M.J. gives him a kiss, and tells him to check it out.

Meanwhile, Hannibal King arrives in town and goes to a trendy vampire Goth club called Club Jugular. After intimidating the doorman into allowing him entrance, he begins asking people about the Amulet of Damballah.

Uptown, Lilith Drake breaks into the home of Jacob Weisenthal. She asks him where to find Michael Morbius, but the terrified Weisenthal has no idea where Morbius is.

Spider-Man meanwhile, rescues a woman from a burning building. Landing on the street, he meets Lilith Drake in her alias as a reporter for Now Magazine. Lilith name drops Michael Morbius, alluding to the idea that he may be responsible for the recent abductions. Spidey's spider-sense begins to tingle in her presence, but he is not sure why.

Later that evening, Hannibal goes to another club called the Voodoo Lounge. There he meets Topaz and Collette Drumm and asks them about the amulet. Collette tells Hannibal that the amulet was last seen in the presence of Lilith Drake. By possessing the amulet, the daughter of Dracula now has control over the zombie of Simon Garth. King leaves the Voodoo Lounge and returns to Club Jugular.

Spider-Man changes into his civies and goes to Club Jugular. While poorly attempting to pass as a Goth, he runs into Hannibal King and Lilith Drake. Lilith and Hannibal begin fighting one another, while Pete changes into Spider-Man. As he enters the fight, Lilith tosses him through a window. Hannibal fails to obtain the amulet from her, and Lilith eventually makes her escape.

Spider-Man and Hannibal King decide to team-up to track Lilith down. King tells him about the amulet, and that the Zombie is actually responsible for the recent abductions.

They track Lilith to her hair, and resume their fight. Lilith wants to enslave King, and turn him into her personal vampire general. King naturally refuses the offer, and succeeds in snatching the Amulet of Damballah. He then orders the Zombie to attack Lilith. Lilith breaks free, but it is clear now that her current operations in New York are hopeless. She manages to evade capture once again, just as the sun begins to rise in the sky.

The following day, Pete tells M.J. of his adventure. He is still not sure whether he actually believes in vampires however.

Hannibal King has the Zombie crated up and shipped to New Orleans. He travels ahead to confer with his client, Donna Garth. Donna is the daughter of the once-human, Simon Garth. King hands her the Amulet of Damballah.

Retrieved from "https://heykidscomics.fandom.com/wiki/Spider-Man_Unlimited_Vol_1_20?oldid=1547619"
Community content is available under CC-BY-SA unless otherwise noted.