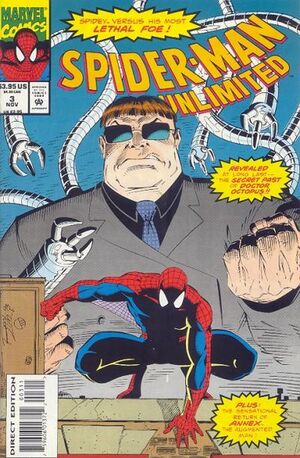 Appearing in "An Obituary for Octopus"Edit

Synopsis for "An Obituary for Octopus"Edit

Dilbert Trilby is in his office writing the latest set of obituaries. A high school intern named Oscar steps in with his latest assignments. Trilby shows Oscar his office which stores all of the obituaries and the retractions they've had to make over the years with people being dead but coming back. Trilby gets a phone call from Joe Robertson telling him that Doctor Octopus just robbed the Robeaux Research Centre and that his obit had to be updated. Trilby tells Oscar about a blank which is a person who has accomplished nothing important in their life and won't be missed by anybody in the world. Trilby finds the Doc Ock folder as he continues to talk to Oscar. He then fills Oscar in on Doc Ock's life.

He starts with his school life and how he was popular with school yard bullies. His father also disapproved of the way he would never fight back and constantly called him weak and a coward. This led to confrontations with Otto's mother, Mary, about Otto's personality.

Meanwhile, at the Robeaux Research Centre, Peter finishes taking photos of the hole in the wall Doc Ock made his entrance through. Dr Iberia tells him and Ben Urich that they specialize in AIDS research and that Ock stole their latest bloodwork.

Trilby continues with Ock's obituary, now at the point of his college years. They mention that he survived high school, and due to his extreme intelligence, was left with many college possibilities. However, during Otto's freshman year, Torbert (his father) died in a construction accident. He then graduated college at the top of his class.

Spider-Man finds Eddie Rollins to find out information about Ock's whereabouts and motives. Trilby then moves on Otto's work at the U.S. Atomic Research Centre. It is there that he meets Mary Alice Anders and they begin a relationship. It is at this time that he begins working on his robotic tentacles.

A man named Willard Jaxton moves radioactive materials in his truck and has done for the past twelve years. Suddenly, a tentacle smashes through the window and steals a radioactive isotope when Spider-Man shows up. The two battle but Ock seems more interested in escaping that fighting. Despite the fighting, Ock doesn't reveal his intentions for the blood and the isotope. He distracts Spider-Man by smashing a gas pipe. Spider-Man quickly attatches a Spider-Tracer on his shoulder and seals up the gas pipe.

Trilby tells Oscar that the relationship between Otto and Mary Alice deepened to the point that he proposed to her, which she accepted. Overjoyed, he rushed to his mother's house to tell her. But she wasn't happy about it because she hoped he would live to take care of her. Saddened by this, he broke his engagement. Rumours say that he had his cousin have her dismissed from the research facility.

In Doc Ock's lab, he has set up an experiment compromising of the blood and the radioactive materials. He reveals that he just has to monitor the chemical levels when Spider-Man bursts out of the dark and attacks him. During the fight, Doc Ock continues with his experiment and says that the experiment is not for his own health.

In the last part of Trilby's obituary, it shows that Otto's personality changed over anger for his mother so much that people started calling him Doctor Octopus. He returned to his mother's house to talk to her, when he finds her all dressed up. She reveals that she has been dating a librarian she met at the supermarket. She says she is entitled to fun and happiness. Otto becomes angry at this because he could have been happy with Mary Alice. Shocked from this attack, Mary has a heart attack and dies. He was so consumed with guilt that he was careless over the next few weeks. He was distracted during one of his experiments which exploded, fusing his tentacles to him that he became Doctor Octopus!

Continuing on with the fight, Ock becomes more angry as the web-slinger pursues with finding out what he's up to. Spider-Man guesses that he is making a cure, but refuses to believe that. Ock announces that his experiment is over. Suddenly, Ock's tentacles fall to the ground, limp. Ock sadly says that his experiment has failed. Meanwhile, at the Robeaux Research Centre, Dr. Iberia is called into perform a surgery as one of his patients go into heart failure. Doc Ock is arrested, but is still crushed about his experiment.

Meanwhile, at the Daily Bugle, Trilby finishes his updated obituary of Doc Ock when Oscar enters saying they have caught Ock. Oscar carries another assignment sheet. Trilby looks at it and says that it's another blank who won't be missed. The sheet drops to the floor, which reads that Mary Alice Burke died today at Robeaux of Aids...

Retrieved from "https://heykidscomics.fandom.com/wiki/Spider-Man_Unlimited_Vol_1_3?oldid=1453728"
Community content is available under CC-BY-SA unless otherwise noted.