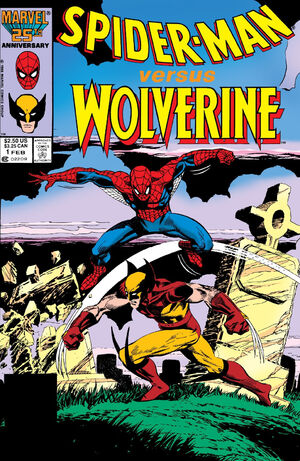 The story begins with Wolverine involved in an incident in his recent past where he and his best friend 'Charlie' are between a horde of KGB agents and a barbed wire fence. It was a mission that Logan had protested, but Charlie insisted and her handler double-crossed her. Charlie called for Logan's help and he understood that it was serious. After fifty Soviet operatives couldn't take them down, they sent in KGB agents that had been undercover for years and Wolverine's beserker rage finished them all. After the slaughter, all that was left was a little heart shaped pendant. Spider-Man then comes across a crying girl who mentions the names Sophie and Burt. On investigation Spider-Man finds Sophie and Burt killed in a professional hit. Back at the Daily Bugle, Ned has some leads on Charlemagne and takes Jonah aside. Jonah eventually sends both Peter and Ned to Germany in order to follow the story. After getting to dinner late at his Aunt May's, Peter took Mary Jane Watson out to a movie and his spider-sense warned him of danger. Before he could change into uniform, a sniper started a panic and Spider-Man was run-off by the police. After feeling useless and thinking he ruined his relationship with Mary Jane, Peter decided to give-up being Spider-Man. After leaving the X-Men in a time of need, Logan traveled to Potsdammer Platz, West Berlin, where two KGB agents blew their cover by killing muggers and Charlemagne killed them while Logan's back was turned. While in Kurfurstendamm, Logan got the scent of Spider-Man in civilian clothing and deciphered his secret identity. Logan warned Peter to stay away from Berlin and forget about Charlemagne, but, unfortunately, while they are out talking Ned was killed. Logan arrived and killed all of the agents and again warned Peter to leave.

After feeling responsible, Peter did not leave, but went to a costume store, where he purchased a Spider-Man costume similar to his original blue and red, except for "Die Spinne" on the back. Spider-Man followed a spider-tracer over the Berlin Wall, into East Berlin, and, after a swift escape from the border patrol, ended in a hotel with an unknown couple and a note, stating "You're in way over your head, Bub! Go Home!". Logan tracked Charlie to a steel mill just outside of East Berlin and the two stayed together for a while. When the couple went to dinner at The Ganymed on Friedrich Strasse, Spider-Man arrived to inform them that everyone in the restaurant was an agent wanting to kill Charlie, a fact that Charlemagne and Wolverine already knew, and a gunfight broke-out. After loosing Charlie in the fight, Wolverine and Spider-Man attempted to track her down, by getting to her marks before she did, but were always one step behind.

After the pair split, Charlemagne called Wolverine to a Soviet cemetery at Teptow and he understood that she wanted him to end her life, so that the Soviets wouldn't have the chance to torture her. After flinching, Wolverine pulled too much and Charlemagne was bleeding to death. At that time, Spider-Man arrived and attempted to stop Logan from killing her. A brutal fight broke-out between the two. While on top of Spider-Man, Wolverine stated Spider-Man would have to use all his strength to break Wolverine's neck, while he would just have to lash out his claws to kill Spider-Man. At that time, a government chopper arrived and the two split. In the confusion, Charlemagne sneaked-up on Spider-Man, aware that he was tense, and he gave a punch of super strength, killing her. Charlie died in Wolverine's arms and the agents left. After giving Spider-Man a fake passport, the pair returned home, where Jonah congratulates Peter on his photos and Mary Jane came-by to comfort him.

Retrieved from "https://heykidscomics.fandom.com/wiki/Spider-Man_Versus_Wolverine_Vol_1_1?oldid=1453771"
Community content is available under CC-BY-SA unless otherwise noted.