Start a Wiki
Part of the 'Torment' story arc 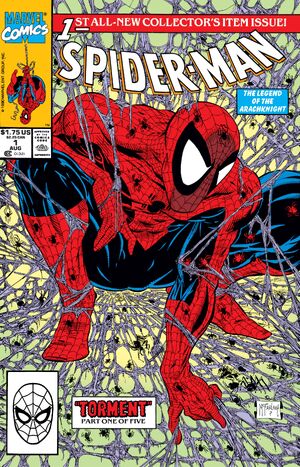 Before I go -- a little helpful hint -- breathe through your nose. 'Cause those webs can taste pretty hideous! Heh-heh.

Appearing in "Torment (Part I of V)"Edit

Synopsis for "Torment (Part I of V)"Edit

Spider-Man web-slings across the city and stumbles upon a mugging in progress. He gets the drop on the criminal who turns around and fires at him. Spider-Man easily dodges the bullets then disarms the man. He hangs him suspended from the cornice of a building wrapped up in web fluid.

Elsewhere, a mysterious individual conducts a ritual that summons forth the Lizard. The Lizard rises from the East River and tries to track down the source of a persistent throbbing in his skull. He comes to shore and attacks a group of would-be thieves. He dives into them demonstrating a savage ferocity unlike any he's ever displayed before. One of the punks fires a gun at the Lizard and blood sprays against the wall behind him. This is hardly enough to stop his rampage.

The next morning, Peter wakes up and decides to a little web-slinging before class. Mary Jane bids him good-bye and looks at the front page of the Daily Bugle. The headline reads "3 Killings - men slashed to death". A photograph in the paper shows a wall with the letters "CNNR" written in blood.

As day turns to night, the Lizard claims another victim.

Retrieved from "https://heykidscomics.fandom.com/wiki/Spider-Man_Vol_1_1?oldid=1573902"
Community content is available under CC-BY-SA unless otherwise noted.