Start a Wiki
Part of the 'Infinity War' event 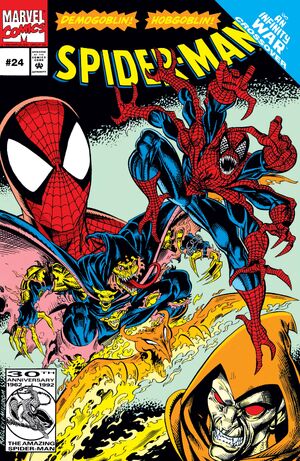 This thing is strong. I need some time to figure out what it is and how to handle it!

Waking up from nightmares about some of his super-villians, Peter Parker leaves MJ a note and heads out into the night as Spider-Man hoping to clear his mind. He starts commenting on how his life is like one of Mary Jane's soap Opera's and how he haunts his own dreams like an evil twin. (No that's really in this issue. I am not making it up.) But he laughs these thoughts away saying, "I'm Spider-Man... And I Love Being Me!" (This entire issue reads like something from the Spidey's Super Stories aimed at very young children.)

He swings by and stops a possible mugging from taking place even without the person, who is about to be robbed, knowing what could have just happened. But from the shadows we see a six-armed being clinging to the side of the building. No question who this might be seeing as how the Doppleganger is featured on the cover.

We cut to Jason Macendale having his own nightmares about the demon N'Astirth. Macendale made a deal with the demon for more power and he did receive his wish, at the expense of his humanity. The demon turned Jason into an actual demon and it was only just recently that the demon and Jason split into two seperate beings. Waking from his dreams, Jason goes into the his work-out room to do some training before putting on his old Hobgoblin costume, vowing to kill the demon he was once joined with. As he flies off into the night he doesn't notice that the demon is actually following him.

While swinging through the city, Spider-Man is questioning if he hung up his costume would some of his villians follow suit, when out of no where the Hobgoblin goes smashing into an electric billboard right next to Spider-Man. A fight has started between Hobgoblin and the Demogoblin causing Macendale to fly off course. DUring their fight debris starts falling onto the crowd but thankfully with the two goblins' attention focused on each other, Spider-Man has plenty of time to deal with it before any civilians get hurt.

After making sure no one is hurt another web line shoots out and cuts Spider-Man's sending him hurling down into the Hobgoblin. On the ground surrounded by a fog (that wasn't there before ), Macendale and Spider-Man are arguing when the Doppleganger jumps out and catches Spider-Man off guard. While Spider-Man and his twin struggle with each other, Hobgoblin tries to make his exit but is stopped by his twin.

During Spider-Man's fight, at one point, the Doppleganger gets thrown into traffic and starts smashing and tossing cars out of its way. Spider-Man decides at this point that he can't continue this fight with all the people around, so he starts to run away hoping his twin will follow. Using the hobgoblin's glider, Spider-Man hits a web line on it hoping to make more distance with Macendale's help, only they both fall to the alley below, right into the Demogoblin and the Doppleganger.

Spider-Man and the Hobgoblin decide to team up and they put a stop to both of their foes. With Spider-Man facing him, Macendale raises his gun only to shoot the Doppleganger that is inches away from attacking Spider-Man. With nothing left in his weapon the Hobgoblin takes off and Spider-Man doesn't stop him. Leaving the body of the Doppleganger behind, Spider-Man takes off thinking he must check on MJ (for some reason) and it is picked up by Demogoblin who says that he might be able to use it in his campaign against evil.

Retrieved from "https://heykidscomics.fandom.com/wiki/Spider-Man_Vol_1_24?oldid=1453797"
Community content is available under CC-BY-SA unless otherwise noted.