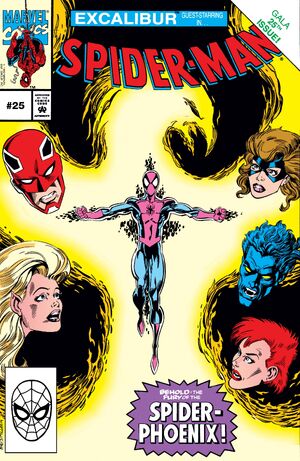 As Peter Parker, Spider-Man receives a letter at the Daily Bugle from Captain Britain asking for help in London. There, he got disoriented and was attacked by an animated stone gargoyle (not to be mistaken with the Grey Gargoyle). After taking off it's head, he realized it was only a robot, it shot a gas that caused Spider-Man to fall into a tunnel. When he reached the end he found he was at the feet of Juggernaut! The fight went back and forth until Spider-Man blinded Juggernaut and caused him to hit the ground hard.

Spider-Man realizes Phoenix is dead but makes a revelation. When Captain Britain is about to get killed, Spider-Man comes out calling himself the Spider-Phoenix (using Phoenix's powers). Using Phoenix Force he destroys D'Spayre and Nightmare and they both realize that they're both robots! Spider-Man's Phoenix powers fail and Captain Britain saves him.

They understand something's up when they're attacked by the Green Goblin, Vermin, The Lizard, Scorpion, Tarantula, Rhino, Doctor Octopus, Vulture, and Silvermane. Most of them are dead so Spider-Man realizes they're robots too. They destroy them all and make yet another revelation. The robots have a familiar grin on their face, after discussing it Captain Britain starts to understand and pulls off an invisible helmet off Spider-Man's head. After taking the one off Captain Britain's head, they realize, they're in Murderworld! They escape, find the real Excalibur, and put Arcade into custody.

Retrieved from "https://heykidscomics.fandom.com/wiki/Spider-Man_Vol_1_25?oldid=1453798"
Community content is available under CC-BY-SA unless otherwise noted.