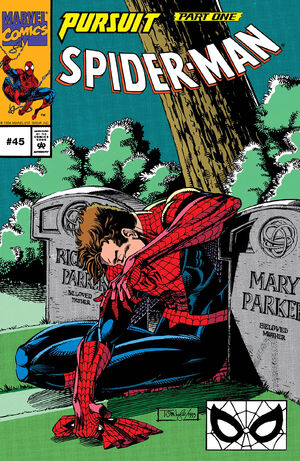 Appearing in "The Dream Before"Edit

Synopsis for "The Dream Before"Edit

Spider-Man destroys the bodies of his Simulcrum parents. The Chameleon hides from the wall-crawler. Peter doesn`t want to tell Aunt May the truth about his parents. Webhead starts to search for the Chameleon with rage and the villain sends some goons to kill him. Spider-Man defeats the thugs and leaves a threatening message to the Chameleon. After this, Peter goes to see Aunt May and tells her the real story of his Simulcrum parents.

Retrieved from "https://heykidscomics.fandom.com/wiki/Spider-Man_Vol_1_45?oldid=1723983"
Community content is available under CC-BY-SA unless otherwise noted.