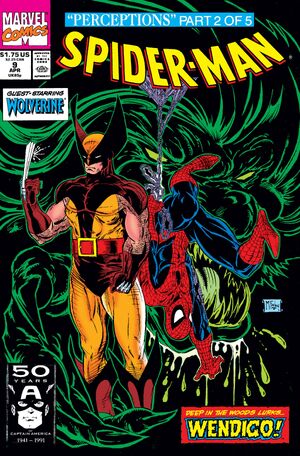 Wolverine shows up in the woods of Hope, British Columbia, exasperated by the fact certain locals see themselves as potential “heroes” and slaughter countless innocent animals with the hope of tracking down the Bigfoot creature – the alleged murderer of two boys – and killing it. Wolverine attacks one of these hunters and intimidates him, telling him to pass the message to his colleagues that slaughtering the animals is wrong. Meanwhile, Peter Parker is troubled by some things entrusted to him by his Daily Bugle colleague, Melvin Gooner, that make him suspect some answers may be found at the top: namely the Chief Inspector of Royal Mounted Canadian Police. After witnessing a public quarrel between hunters and environmentalists and being informed by a local of the legend of Wendigo, Peter overhears a heated argument between Anna Brooks, the reporter who broke the Bigfoot story, and Chief Inspector Krahn. Peter later introduces himself to Anna and has an interesting conversation with her. Meanwhile, in the woods, Wolverine goes to the spot where the first boy’s body was found and smells Wendigo’s scent there. He also detects the spot where the boy was originally buried and also smells other dead bodies buried in the area. Nearby, policemen are being guided by a local tracker to where the creature sleeps. As Wendigo wakes up and unleashes a cry of fury, Wolverine hears it and realizes the Wendigo has just been found by people.

Retrieved from "https://heykidscomics.fandom.com/wiki/Spider-Man_Vol_1_9?oldid=1453781"
Community content is available under CC-BY-SA unless otherwise noted.