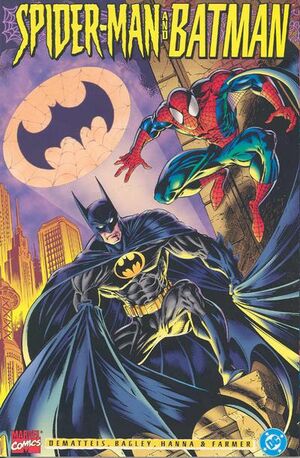 I always thought of myself as the Orson Welles of crime and chaos, while you, apparently, aspire to be nothing more than... David Hasselhoff!

In the beginning of the story, it shows the respective heroes awaking from their nightmares of the death of their loved ones (Spider-Man dreaming of Ben Parker's murder and his killer showing his face to be the Joker, and Batman witnessing the death of his parents at the hands of Carnage) and reflecting their roles as super heroes.

In Ravencroft Institute, Spider-Man is at the institute due to being requested by Dr. Ashley Kafka to overseeing a contained Carnage as she attempts to cure his mental condition. Despite heavily contained by his prison, Carnage breaks his prison and battles Spider-Man, but is then stunned and reverted back to Cletus Kasady by the institute's heavily armed guards with "microwave guns". Kafka is confused as to how Carnage was able resist the high intensity heat wave from his prison that neutralize the symbiote, and digress that the only way to neutralize the symbiote was through Kasady's mind.

Spider-Man and Kafka are greeted by Cassandra Briar, a behavioral psychologist appointed by congressional committee to deal with people such as Kasady, have a solution to Kasady's hostile mentality is by inserting a computer chip, a bio-technic chip, which controls and pacify him. However, Kafka and Spider-Man are totally against Briar's methods but are rebutted by Briar as her method solves to an end to Kasady's terror as Carnage in which neither Kafka and the hero were able to solve. As Briar talk to the two, Kasady is undergoing the implant surgery.

In Gotham City, Batman stops the Joker from unleashing Bats infected with the Joker venom from infecting the city. At Arkham Asylum, after viewing an imprisoned Joker in his cell from a security camera Briar and Kafka are present in Dr. Arkham's office. Briar consults with Arkham on using her bio-technic chip to solve Joker's insanity.

Arkham is unsure of Briar's method but is then convinced when Briar surprisingly shows a pacified and timid Cletus Kasady in handcuffs. Briar fully explains to Arkham that the chip not only calmed Kasady's aggression but forcefully allows the symbiote into a state of dormancy as without Kasady's violent emotions the symbiote couldn't feed off and is utterly tamed.

Sometime later, Joker is implanted with the chip and is displayed along with Kasady in a press conference in front of Arkham Asylum, as Briar praise the use of the chip. Later, Briar and a driver escorts Joker and Kasady through Gotham. The driver is uneasy of having the two criminals unguarded, but Briar assures him that the men are not the men they once were, and that "the Joker and Carnage are dead". As Briar said this, the driver is impale by Carnage. The symbiote explains to Briar that the chip proves useless in containing him and has been waiting for the right moment to "explode".

As the car they are in crashes, Carnage held both Joker and Briar as hostage as the guarded government escorts are at a standstill. A guard then reveals himself to be Batman. Carnage reveals himself to Batman as being entirely different from a usual Batman's Rogue Gallery nemesis. While Carnage talking, Spider-Man appears and saves Briar with his webs. Spider-Man and Batman attacks Carange. However, Carnage escapes and along with the Joker by shooting shards of tentacles at the guards, wounding them and the heroes are force to help them.

Later, Batman talks to Spider-Man and wants him to stop aiding him stopping Carnage and leave the city. Spider-Man protests to him that he only wants to help him, but Batman states again that he doesn't need or want his help and then left.

At a warehouse, Carnage manage to destroy the bio-technic chip within the Joker allowing him to be who he was again. Carnage then propose Joker into working together in which he obliges.

At the Bat Cave, Batman researches Cletus Kasady and realizes that his psych is too unfathomable to grasp. Batman then decides to leave to "pick up something" after implicitly disrespects Alfred's finger sandwiches.

Meanwhile, Spider-Man swings across Gotham City and stops an insane mugger from murdering a woman and is then greeted by Batman in his batmobile who beckons him to come with him.

In Joker's hideout in a abandon theater, the Crown Prince of Crime explains to Carnage of his plan of implanting his Joker virus in hundreds of "Joker-in-the-boxes" and be giving away to "needy tots" their "Christmas present". However, Carnage argues against the Joker's scheme as "stupid" and prefers the more direct motive of mass-murdering people in the most horrific way. This disgusts the Joker, who proudly proclaims his way being about "style" and "theater", and decides that teaming up with Carnage is wrong, comparing him to David Hasselhoff. After infuriating Carnage, Joker makes his leave through a trapdoor. From a safe distance, the Joker uses a remote detonator to destroy his hideout with massive explosions with Carnage inside.

Meanwhile, traversing on the Batmobile, Batman apologizes to Spider-Man for denying his help and that having a friend who knew about Carnage may prove helpful in arresting the symbiote. The two manage to track Carnage's location through a remnant of his chip by tracking its frequency, and discovers the ruined theater. The two discover the body of Carnage but it proves to be a trap, as Carnage grabs hold of Batman, who tells Carnage he'd rather die than submit.

As Carnage is poised to make the killing blow on Batman, the Joker interrupts and tells Carnage to back off from killing Batman, as he is the only one to has the right to kill "his" Batman. Joker reveals this Joker-in-the-Box containing the deadly virus, announcing his plans to unleash it immediately. Spider-Man expresses shock at Joker's mindless disregard for human life, while Carnage displays abject fear of being killed, giving Batman the edge in combat with the cowardly villain. Spider-Man then snatches the Joker-in-the-Box from the Joker with his webshooter, as Batman subdues a "weak-minded" Carnage into submission, forcing him to revert him back to Kasady. Spider-Man tracks down Joker and grabs hold of him, and threatens to kill him, which delights Joker, who is eager at the chance at driving a "goody two shoes" into cold-blooded murder. Spider-Man relents, releasing Joker, and taking him down with a punch, knocking him into unconsciousness.

With the defeat of both Carnage and the Joker, both Batman and Spider-Man thank each other, wordlessly with a handshake. Spider-Man swings off, returning to New York, as Batman watches over Gotham.

Retrieved from "https://heykidscomics.fandom.com/wiki/Spider-Man_and_Batman_Vol_1_1?oldid=1717540"
Community content is available under CC-BY-SA unless otherwise noted.