Part of the 'Spider-Verse' event 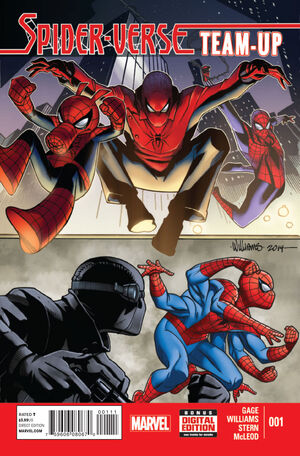 I don't know what our superior will think but I'm calling this a victory. The Inheritors have one less target. And in at least one reality the Parker family has a happy ending.

Appearing in "The Power of Positive Thinking"Edit

• The old-man Spider-Man from AMAZING SPIDER-MAN #500 and Spider-Ham team-up to recruit BEN REILLY!

• Spider-Man Noir and a Six-Armed Spider-Man go on a mission that terrifies them more than anything they’ve ever seen!

Appearing in "The Luck of the Parkers"Edit

Synopsis for "The Luck of the Parkers"Edit

Retrieved from "https://heykidscomics.fandom.com/wiki/Spider-Verse_Team-Up_Vol_1_1?oldid=1504035"
Community content is available under CC-BY-SA unless otherwise noted.