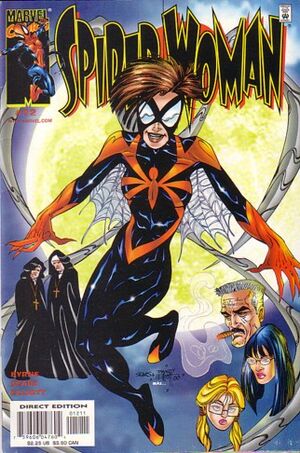 Appearing in "Stipendium Pecarte Mors Est (The Wages of Sin Is Death)!"Edit

Synopsis for "Stipendium Pecarte Mors Est (The Wages of Sin Is Death)!"Edit

Spider-Woman is flying through the air after having been thrown by a Werewolf who she is fighting at a graveyard in New Orleans. She explains that she should start the story from the beginning.[1]
The reason she is in New Orleans is that J. Jonah Jameson, her uncle, wants to go to a publisher's conference there, because Mattie is on a school break he believes it will make a fun holiday for everyone.[2] Matties friend Cheryl is visiting and is about to go home when Marla suggests she join them on their trip.

Retrieved from "https://heykidscomics.fandom.com/wiki/Spider-Woman_Vol_3_12?oldid=1454137"
Community content is available under CC-BY-SA unless otherwise noted.