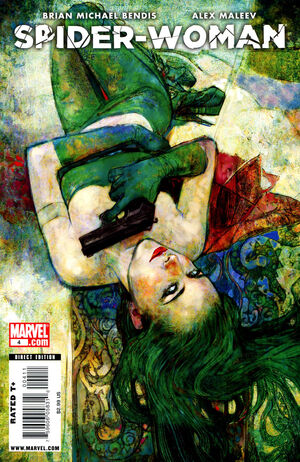 It's Spider-Woman versus the Thunderbolts. That's right...all of them. A daring chase through the streets of Madripoor finds Jessica Drew pushing herself to the limit with nowhere to turn. Another dazzling chapter from the Eisner award-winning team of Bendis and Maleev featuring tons of material not seen in the accompanying motion comic.

Retrieved from "https://heykidscomics.fandom.com/wiki/Spider-Woman_Vol_4_4?oldid=1726640"
Community content is available under CC-BY-SA unless otherwise noted.