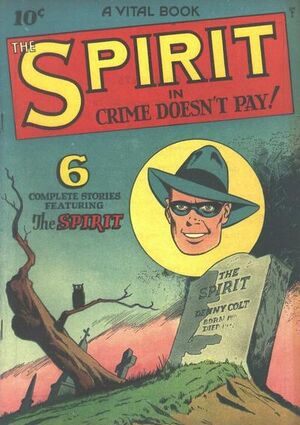 Appearing in "Death After Death"Edit

Synopsis for "Death After Death"Edit

A dynamiter dies in prison, but before he does, he threatens that he'll blow up the city when he's gone. The first explosion happens in Commissioner Dolan's office. Dolan promptly rounds up the dynamiter's gang, but only one is caught. He states his alibi, confessing that he was with a fortune teller all morning. The Spirit visits the woman to find out the truth. At which point, she informs the Spirit that the gang member was indeed there this morning and wanted to communicate to the ghost of his old boss. The Spirit leaves satisfied, and when he exits, the building explodes behind him, killing the woman inside. Again, the petty crook has an alibi, as he was back at police headquarters with Commissioner Dolan when the second explosion occurred. However, the Spirit thinks there's something fishy going on and sets a trap for the bomber. He suggests that Dolan gather all the high officials of the city to discuss the problem. At the meeting, the Spirit spies a mysterious figure leaving a ticking bomb in the cellar. When the bomber leaves, the Spirit dismantles it and heads into the meeting room. To no surprise, the petty thief is there too, hoping to establish another alibi. The Spirit informs the Commissioner, and the thief, about the planted bomb, and how it will go off any moment. The two panic and want to leave the premises. However, the Spirit refuses anyone to leave. As the ticking becomes louder (as Ebony White has the hidden clock), the gang member goes into hysteria, and confesses that he planted all the bombs.

Retrieved from "https://heykidscomics.fandom.com/wiki/Spirit_(Quality)_Vol_1_2?oldid=1474551"
Community content is available under CC-BY-SA unless otherwise noted.