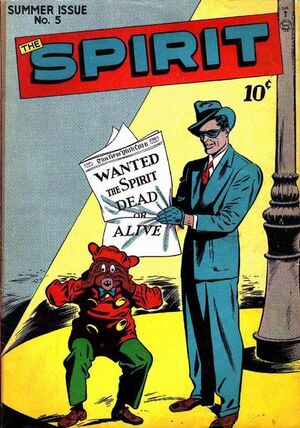 Boys, Sad Eye's Sam's record still stands! Nobody has ever benefited from a proposition he made them!

Sad Eyes Sam makes a financial proposition with a bunch of hoodlums. For some quick cash, he bets them that he will not survive a much needed operation he needs to undertake. If they advance him $500 dollars, he'll make them the beneficiaries of his Life Insurance Policy. Sad Eyes Sam checks into the hospital, and the three goons follow him to see if his story is legit. The doctor informs them that he has a one chance in a thousand to live. After the operation, Sad Eyes Sam is wheeled into a hospital room and the doctor informs the crooks to wait a few hours to see if he comes to. They go to a bar to wait it out. Meanwhile, Sad Eyes Sam is found dead, it seems he was murdered with a scalpel. The Spirit has been following the gang the whole time and when he hears the news of Sam's murder, he accuses the gang and escorts them back to the hospital. The doctor explains that even though the operation was successful, Sam had only one more day to live. When the Spirit looks over the policy, he notices there is a suicide clause which nullifies the contract. Thus, Sam committed suicide and nobody gains anything from it.

Retrieved from "https://heykidscomics.fandom.com/wiki/Spirit_(Quality)_Vol_1_5?oldid=1474554"
Community content is available under CC-BY-SA unless otherwise noted.