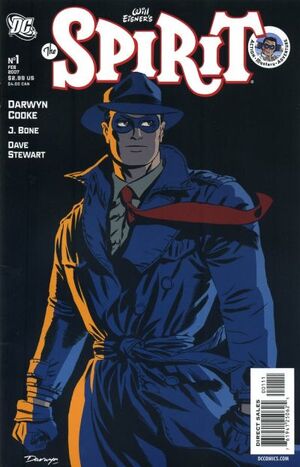 Now quite! Will you please stop speaking in that idiotic way? Or can't you help it? Maybe you're actually a news robot. Is that it?

-- The Spirit to reporter Ginger Coffee

NNN News Anchor, Penny, reports that one of her colleagues, fellow anchorwoman Ginger Coffee has been kidnapped and is being held hostage by crime lord Amos "The Pill" Weinstock. Police Commissioner Dolan gathers all of his tactical units and mounts an extensive search and rescue operation. He hopes that his ally the Spirit learns of the incident and decides to intervene.

The Spirit does get involved, and sneaks into the crime scene by hiding beneath the upholstery of Weinstock's sedan. Tearing himself free, he enters the building and stealthily begins taking down Weinstock's goons. He rescues Ginger and escapes via the sewer system. Ginger, who perpetually talks in "Newspeak" cadence, aggravates the Spirit, and the two quarrel throughout the entire affair. Emerging topside, the Spirit summons his faithful sidekick, Ebony White and leads Ginger into Eb's taxicab.

After everything settles down, the Spirit asks Ginger to keep his name out of the news broadcasts. Although she agrees to his wishes, she in fact does the exact opposite, publicly citing that it was actually she who rescued him from certain death.

Retrieved from "https://heykidscomics.fandom.com/wiki/Spirit_Vol_1_1?oldid=1475284"
Community content is available under CC-BY-SA unless otherwise noted.