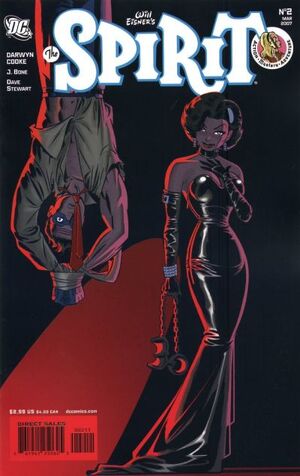 I've noticed that when I show up for formal parties in a blue mask and hat, it usually ends up with me out back, getting beaten stupid by a gang of doormen the size of beer trucks. This time I'm playing it smart.

-- The Spirit explaining why he's disguised as a blind man.

Meanwhile, Denny Colt gets a lead on P'Gell's activities and breaks off a romantic evening with Ellen Dolan. Ebony drives him down to the Karifistan embassy, where he infiltrates the party as a blind man. Hussein Hussein greets Denny and tries to get rid of him by shoving him down a staircase. Several door attendants find him, and drag him outside where they proceed to beat him up.

The following day, Denny learns that Madam P'Gell has married Prince Farouk. He changes into the Spirit and returns to the embassy to investigate P'Gell's true motives. When he arrives, he finds that P'Gell has decapitated her new husband. She confesses that she agreed to the marriage to avenge the death of her first husband whom Farouk killed years earlier. The Spirit attempts to apprehend her, but P'Gell smashes him across the back of the head with a lamp.

The Spirit awakens hours later, but P'Gell is long gone. Hussein Hussein is present and insinuates that he is connected to Israeli Secret Service. The Spirit isn't sure if he believes him, but after the night he has had, he really doesn’t care.

Retrieved from "https://heykidscomics.fandom.com/wiki/Spirit_Vol_1_2?oldid=1475286"
Community content is available under CC-BY-SA unless otherwise noted.