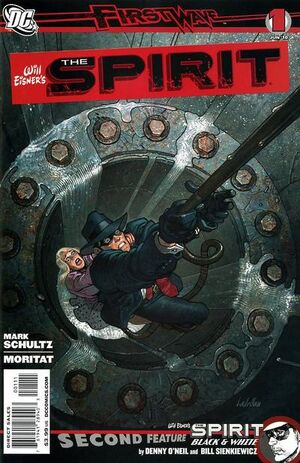 I was once Denny Colt, now I'm called the Spirit. Because, you know, I'm supposed to be dead. I do what I can.

The Spirit destroys a drug shipment that the Octopus Gang was bringing into Central City. This forces Mr. Ovsack to call a summit between the "families" where he announces that he has hired an assassin from Europe to deal with the Spirit once and for all.

Appearing in "Go to Hell"Edit

Synopsis for "Go to Hell"Edit

Two brothers have had a falling out when one of them testified against the other. The Spirit witnesses the killing of one of these men and is asked by the dying brother to deliver a note. He follows through with this request. When he meets up with the other brother, he gives him the note. A henchman pulls out a gun and fires at the Spirit, who ducks, and the bullet hits and kills the second brother. The note falls to the floor and reads: "Go to Hell."

Retrieved from "https://heykidscomics.fandom.com/wiki/Spirit_Vol_2_1?oldid=1475292"
Community content is available under CC-BY-SA unless otherwise noted.