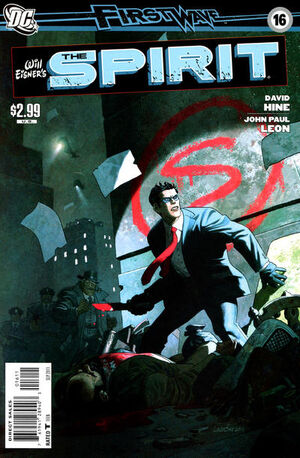 Anyone can dress the part, put on a mask and go out there toting guns and claiming to fight for justice. Sure John Doe cleared some scum off the street, but he didn't make people sleep any more soundly in their beds. When night falls, there is only one man I trust to watch over Central City... The Spirit.

Appearing in "The Big Picture"Edit

Synopsis for "The Big Picture"Edit

The Spirit has gone rogue, killing criminals that the judicial system has let slip through its grasp. Now The Spirit – the real Spirit – must find the impostor who is signing these murders with an "S," while the pressure is on Dolan to make an arrest. Will The Spirit end up behind bars before the killer strikes again?

Retrieved from "https://heykidscomics.fandom.com/wiki/Spirit_Vol_2_16?oldid=1606975"
Community content is available under CC-BY-SA unless otherwise noted.