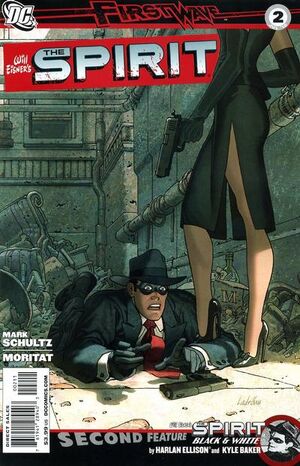 I don't like bullets. But before I could come to grips with that -- I had to die...

Badly beaten, the Spirit stumbles to Ellen's house for safety. He recounts to her about his confrontation with the sexy assassin, Angel Smerti. Soon after his tale, he realizes he's made a mistake, by coming over to her place, he's actually led his foe straight to him. Suddenly, Angel Smerti crashes through the window, threatening them both. Story concludes next issue.

Appearing in "Nimby (Not in My Backyard)"Edit

Synopsis for "Nimby (Not in My Backyard)"Edit

Two grave robbers enter Wildwood Cemetery, but they make such a racket the Spirit investigates. After a brief battle, he's knocked out and the robbers leave. Two weeks later, they're back and so is the Spirit. This time they bury him alive. With a few tricks up his sleeve, he's able to escape the coffin trap. He figures the robbers actually work for the cemetery and heads for the maintenance shack. Yup, there they are. To give them their own medicine, he buries them alive and then informs Commissioner Dolan where he can dig them up.

Retrieved from "https://heykidscomics.fandom.com/wiki/Spirit_Vol_2_2?oldid=1475295"
Community content is available under CC-BY-SA unless otherwise noted.