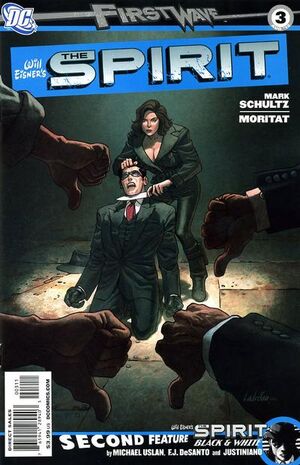 No matter, I am sorry to say. All we have is a kiss before dying time.

Angel Smerti (a professional assassin) has tracked the Spirit down. Their confrontation leads to the rooftop, where Smerti is holding Ellen Dolan hostage. After a brief struggle, Smerti is able to escape from the cops gathering below, by plunging off the roof and releasing a hidden hang gliding contraption. The Spirit leaps after her, but once they're on the ground, he becomes her captive. Later, Smerti decides to deliver the Spirit to the Octopus Gang in person. The two drive to the wharf as the Spirit, tied up in the back seat, makes a bid to redeem her. The brief flirtation between them causes Smerti to do an about face and free the Spirit, just as the Octopus gang surrounds their vehicle. With everyone's guns blazing, Smerti falls over the pier and into the water. The Spirit follows suit, but washes ashore a few moments later. With the help from an atoned henchman, he's dragged out of the drink and stumbles to safety.

Appearing in "15 Minutes of Fame"Edit

Synopsis for "15 Minutes of Fame"Edit

The Spirit goes after a media mogul, who turns out to be a fifth columnist and former Propaganda Minister named "Papa Ratzi."

Retrieved from "https://heykidscomics.fandom.com/wiki/Spirit_Vol_2_3?oldid=1475297"
Community content is available under CC-BY-SA unless otherwise noted.