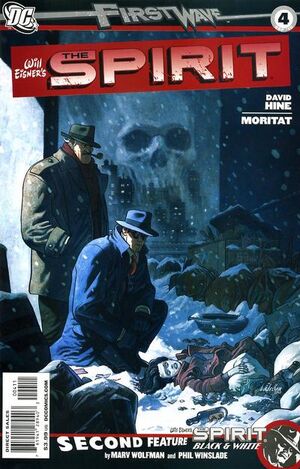 I guess some of us just aren't content with looking cute, cooking, and raising kids. Not when scum like you are crawling around loose on the streets.

A new drug, a white powder called Frost, is being sold on the streets of Central City. When several dopers begin to overdose on the stuff, it calls the attention of The Spirit, Commissioner Dolan and even the head of the Octopus gang, Ulysses Ovsack. After all, as Mr. Ovsack says, "It's killing off the clientele."

The women of Central City also become involved with cleaning up the streets. Ellen Dolan stands up to a couple of drug dealers unarmed, Imani and her Centralettes throw snowballs at another gang of dealers, thus interrupting a deal, and Ebony White shows up to confront the snowballed dealers as Imani and her girls make their escape. Unfortunately, Ebony is the one that gets caught, and the dealer gives her a high dosage of the Frost, leaving her to shiver to death on the cold streets.

The Spirit is after several convicts when a city blackout suddenly occurs.

Retrieved from "https://heykidscomics.fandom.com/wiki/Spirit_Vol_2_4?oldid=1475298"
Community content is available under CC-BY-SA unless otherwise noted.