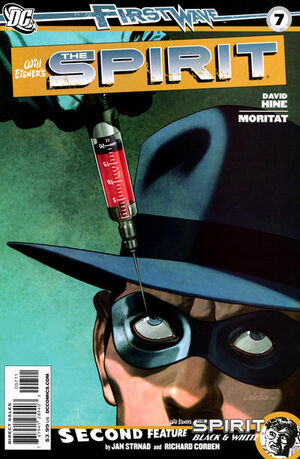 Book that creep for murder one.

Drug dealer Carmine Kass has shot and wounded the Spirit, poisoned Ebony White with filthy drugs and tried to kill little Imani. The Spirit has had enough and begins his hunt for the gangster.

First, he teams up with Commissioner Dolan and they go after all the two-bit dealers. Then, the Spirit finds an I.D. card on one of the overdosed victims. The card belongs to a college kid who left his lady friend in an alley when she began to OD from the deadly drug. He wrapped her body in his coat, carelessly leaving her to die and his I.D. behind. The kid confesses, and tells the Spirit who he purchased the drugs from. With this information, the Spirit sets up a sting operation with the dealers by phone.

The sting proves successful and the cops move in and take down the bad guys. However, there is still no sign of the big man himself, Carmine Kass.

He is actually hiding out at the docks where he receives a message from the Octopus gang. They want to see him. He accepts, and at the meeting he is led behind closed doors where the mysterious Octopus has him blind himself by gouging out his own eyes.

Later, Kass is stumbling on the streets and the police take him into custody. In his cell, he continues his insane mumbling and confides to the Spirit that the Octopus is really a woman, and she wants the Spirit in her arms.

A werewolf is on the loose.

Retrieved from "https://heykidscomics.fandom.com/wiki/Spirit_Vol_2_7?oldid=1613350"
Community content is available under CC-BY-SA unless otherwise noted.