Start a Wiki
Part of the 'Midnight Massacre' event 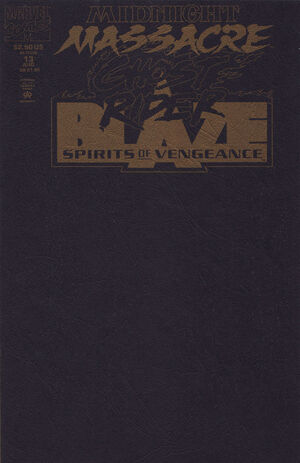 Yes, my children, The Nine have fallen. No longer are they a threat. It is time for the gathering.

Switchblade breaks into The Sanctum Sanctorum of Doctor Strange, but when he grabs the Darkhold, a spell is activated that tries to whisk it to another dimension. But the Darkhold fights back, recognizing Switchblade for what it is. Ghost Rider uses his chain to anchor the Darkhold, but leaves himself open. Switchblade kills the Ghost Rider, but when he's done, Ghost Rider's penance stare is activated and Switchblade feels everything he's done. Weakening him, this gives Louise the chance to grab the Darkhold and read the spell that reverses the spell on Blade, reverting him back to normal, and bringing everyone he's killed back to life, but costing her her own soul in the process.

Retrieved from "https://heykidscomics.fandom.com/wiki/Spirits_of_Vengeance_Vol_1_13?oldid=1454198"
Community content is available under CC-BY-SA unless otherwise noted.