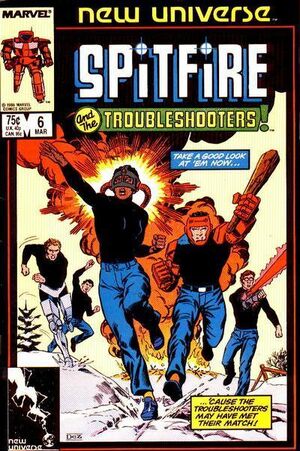 After charges on Jenny Swensen are dropped, Terry uses her Think-Tank to locate the farm where Steel Hawk is working out of, but Jenny insists they not investigate -- which they do anyway, covertly. Meadows field-tests his energy blasting wrist units, Beam-Splitter. Narrowly surviving Steel Hawk's booby traps, they learn that he intends to assassinate the British Prime Minister, and they decide to stop him.

Retrieved from "https://heykidscomics.fandom.com/wiki/Spitfire_and_the_Troubleshooters_Vol_1_6?oldid=1454214"
Community content is available under CC-BY-SA unless otherwise noted.