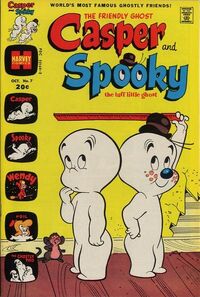 Spooky the Tuff Little Ghost is a fictional character that appeared in titles published by Harvey Comics. Spooky first appeared in Casper the Friendly Ghost #10 (June 1953). He is, according to canon, the cousin of Casper, though how they are exactly related is never really clear. He is, for the most part, the spitting image of Casper, except for freckles, a derby hat, and a large, black nose.

Spooky is written with a Brooklyn accent, for example calling his girlfriend and fellow ghost Pearl, "Poil." His iconic derby hat is, therefore, a "doiby." Although he shares traits with The Ghostly Trio as far as loving to scare the living and being somewhat of a tough guy jerk, he isn't as cruel to his cousin as the Trio is, though he does make fun of him occasionally for being friendly.

Pearl, who fell in love with Spooky when he rescued her from captivity by abusive witches in one comic-book issue, is always trying to stop him from scaring, by reprimanding him, keeping an eagle eye on him, staying with him all day, threatening to break up with him, or dating other ghost-guys. (Whenever she does, she always ends up finding fault with her new date and thinking Spooky is better by comparison, so she returns to him.) So Spooky is always finding ways to keep scaring in secret, sometimes by making it appear that someone else did it.

Appearances in other media

Spooky is part of the 1963 animated television series The New Casper Cartoon Show, which ran from 1963 to 1969.

In 1996, after the success of the 1995 Casper feature film, a new animated show, Casper, premiered on Fox Kids. Spooky was voiced by Rob Paulsen. In the 2000 computer-animated movie Casper's Haunted Christmas, his voice was done by Samuel Vincent.

Retrieved from "https://heykidscomics.fandom.com/wiki/Spooky_the_Tuff_Little_Ghost?oldid=687961"
Community content is available under CC-BY-SA unless otherwise noted.