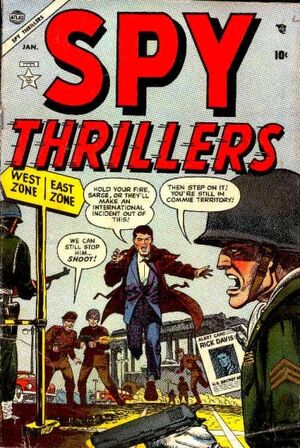 Appearing in "The Whirl of Death!"Edit

Synopsis for "The Whirl of Death!"Edit

Rick Davis is called to the office of his chief where he is introduced to Marie Ledovik whose father, Professor Anton Ledovik had developed a formula for the lightest and strongest metal known to date. It is explained that her father, an anti-communist, attempted to flee Czechoslovakia for the United States. He send Marie first intending to meet with her weeks later but he had since disappeared.

Davis then underwent rigorous training to pose as a Czechoslovakian and smuggled into the country. However, despite his best efforts, Rick was spotted exiting a train in a small border town and was almost shot by an enemy agent. Chasing after the shooter, Rick lost the shooter in the crowd and continued on his mission. He goes to the home of Paul Jaraslaw, Ledovik's former assistant to seek out the professors whereabouts. Paul explains that Anton disappeared from his room recently without any trace. Searching the room, Rick finds a match book for the Cheznik Park and decides they should continue their search there.

When they arrive, an enemy agent throws a knife at them bus misses. Rick tells Paul to stay behind and follows after the spy into a house of horrors where he is ambushed and knocked out. The spies mysterious leader orders them to tie Rick to a motorcycle in the adjacent whirl of death show room where motorcycle stunts are shown in a cylindrical showroom floor. With his hands tied to the motorcycles control, Rick is forced to drive out of control around the room, but manages to free his hands and speed the bike over the embankment and dive free. Returning to the house of horrors, Rick finds the enemy agents with the professor and attacks. He subdues the enemy agents but is surprised when Paul enters the room with a gun revealing himself to be their leader. Rick shoots Paul dead and then smuggles Anton out of the country. Back in the United States, Anton is reunited with his daughter who rewards Rick with a kiss on the cheek.

Appearing in "The Unseen Killers!"Edit

Synopsis for "The Unseen Killers!"Edit

Rick Davis is training to fly a crop duster for a secret mission to uncover a communist plot to sabotage American food growing efforts for needy countries in Europe and Asia. The plot involved using a poison in the pesticides that will make the plants lethally toxic to those who eat them.

With his mission, Rick flies to the midwest where he poses as a crop duster that is hired on as part of a team to eliminate any pests that might threaten the growing vegetables. He is introduced to the head of the group, Anse Johnson who shows Rick around and then holds a meeting with the other crop dusters to show them their plans to dust fields that night.

As the crop dusters retire to their bunks for the night, Rick is left to wonder which one of them is really a communist spy who seeks to poison the crops. Sneaking out of the bunks later that night, Rick spies upon Anse and a group of men preparing to put the poison into the crop dusters overhearing Anse's boasts about how he managed to infiltrate his position after being smuggled into the United States by his government years earlier.

Before Rick can act, he is discovered and knocked out. When he comes to, he finds himself tied up and is left by the communist spies while they continue lacing the crop dusters with poison. Using a lantern in the room, Rick burns through his ropes and frees himself. The fire spreads throughout the hanger, distracting the remaining communists on the ground while Rick takes control of the last plane. Taking off after the other crop dusters, Rick radios the USAF for back up while he tries to shoot the pilots in their planes. Soon fighter planes arrive and shoot the communists spies out of the sky, ending their plot.

Appearing in "The Telltale Machines!"Edit

Synopsis for "The Telltale Machines!"Edit

Put on assignment in England, Rick Davis has been assigned to root out communist elements in the country. Pretending to be a pro-communist rabble rouser, the Scotland Yard stages an arrest all part of their plan to make Rick a person of interest to the communist agents. Rick is soon released from jail and is forced into a meeting with the secret communist group.

Convincing the communist traitors that he follows their ideals, he learns that they are working within the various industries in Britain in order to commit acts of sabotage. Rick is soon put to work at a drill press. Realizing that there is a list of communist operatives. Rick uses falling machinery as a distraction to sneak out and try to inform his ally Mike, who is posing as an organ grinder outside. However, the communists are onto Rick and shoot Mike dead and capture Rick.

They take them back to their hideout and tie Rick up and try to beat answers out of him. Rick fights back when suddenly the lights go out and there are gun shots while someone cuts Rick's ropes. Suddenly the Scotland Yard arrives and rounds up the communists. The lead inspector revealing that they had another mole within the organization who was secretly helping Rick out, should Rick be captured.

Retrieved from "https://heykidscomics.fandom.com/wiki/Spy_Thrillers_Vol_1_2?oldid=1454268"
Community content is available under CC-BY-SA unless otherwise noted.