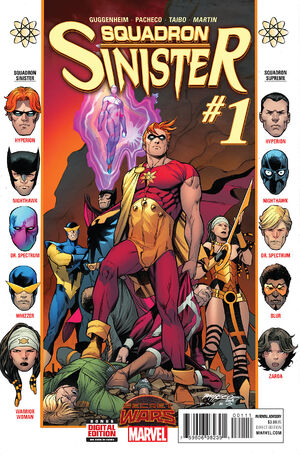 Eight provinces in six weeks. Squadron's on a tear.

Appearing in "No Honor Among Thieves"Edit

Synopsis for "No Honor Among Thieves"Edit

And in the final battle of the annexation of Supremia Province by Utopolis, the Squadron Supreme - Hyperion, Nighthawk, and their comrades - faced off against the Squadron Sinister - Hyperion, Nighthawk, and their comrades. The Utopolitans were victorious, slaying all of their opponents except one, who would act as a regent. Nighthawk selects his counterpart, and Warrior Woman agrees. She and Hyperion kiss, and the group returns to its headquarters.

Twelve hours later a trio of superhumans are assessing the damage. Realising that there is no safety for them from the Squadron Sinister, they vow to reach out to "Hazzard". To save Nutopia, they will need to take drastic steps.

In Utopolis, Hyperion flies to a council meeting. He stops briefly to arbitrate in the case of a man who is accused of stealing rations. Hyperion gets him to confess, then congratulates him on the audacity of his crime - and then punishes the man for being captured by ripping his arms off. He reiterates his creed to the watching crowd: In Utopolis, weakness is a capital offense.

At the council meeting, the Squadron Sinister assess events. The Frightful Four, a rival group of criminals from another part of Battleworld, are building up a collection of weaponry made from repurposed S.W.O.R.D. technology. However, Nighthawk wants then to attack Shadow Province, a minor fiefdom near the Regency. Its ruler, Doctor Zero, has a fortress, where he is trying to build a weapon with argonite, Hyperion's one weakness. To prevent him from using it on Hyperion, Nighthawk thinks they should attack the fortress and secure the weapon, by any means necessary.

This is of great interest to Iron Thor, a Thor Corps representative who has come to ask them about their recent annexation spree. Th Squadron are vaguely troubled by this, but argue that their neighbors are also expansionist. Iron Thor remarks that they should have nothing to fear from him if this is true, and leaves, saying he can show himself around. The meeting having broken up, Whizzer asks Hyperion if they should hold off on attacking Count Zero, but Hyperion says he thinks they should go ahead, and leave Iron Thor for him to worry about.

Roughly eight hours after the arrival of Iron Thor, Hyperion and Warrior Woman are passionately kissing in the ceiling of the council meeting chamber when thy discover the corpse of Iron Thor. Gathering the entire team, Nighthawk is tasked with autopsying the body and finding the killer, then dumping the body in an unfindable location. They don't have much time before the rest of the Thor Corps, or possibly God Emperor Doom himself, come looking for them. However, Hyperion insists they follow through on the mission to get the argonite weapon from Shadow Province.

That night in Shadow Province, the Squadron Sinister start their plan. Whizzer, Doctor Spectrum, and Warrior Womanfight the guards, Nighthawk breaks into the facility to secure the weapon, while Hyperion hangs back and prepares to fight Doctor Zero. Warrior Woman questions the sense in trusting Nighthawk to relinquish control of a weapon that can kill Hyperion, but Doctor Zero arrives and Hyperion hangs up on her.

As Doctor Zero accuses the Sinisters of being cowards, Nighthawk secures the weapon. Hyperion grabs Zero by the neck and proceeds to burn him to ash. The group retreats, even Whizzer, who vanished in the middle of the fight and claimed to have been perusing a wine list in Mutopia.

The following day, Nighthawk hands over the argonite weapon. Hyperion admits that Warrior Woman didn't trust him, and Nighthawk goes back to his stronghold, saying that if he planned to use it, he probably wouldn't have told the team about it in the first place.

In his cavernous laboratory, Nighthawk talks with a disembodied voice. Handing over the argonite weapon was supposed to build trust, but it hasn't. Hyperion suspects that Nighthawk will seize power, but Nighthawk has no such plan, He merely wants to kill Hyperion.

On a street in Utopolis, Warrior Woman is accosted by a voice in an alley. She recognises it immediately as Mark Hazzard, Merc - her handler, and the only one who knows that she is working for the Nutopians!

Retrieved from "https://heykidscomics.fandom.com/wiki/Squadron_Sinister_Vol_1_1?oldid=1454271"
Community content is available under CC-BY-SA unless otherwise noted.