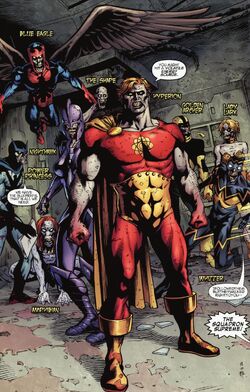 Since the Squadron Supreme from Earth-712 was temporarily stranded on Earth-616, they lived as guests at Project Pegasus. The scientists there studied and learned from the superhero team. Among their peers, Dr. Mortimer Dauoi had his own ideas that were influenced by a terminal disease. Dauoi convinced the scientists that knowing the Squadron's DNA codes might lead to great leaps in medical science. So Dr. Spectrum used his Power Prism to create hard-light constructs of his teammates' individual helixes. When the Squadron returned to their world, Dr. Dauoi grafted their DNA to medical cadavers and - needing a powerful source in order to reanimate his 'test subjects' - used Zeta Rays that were accessible from Pegasus' orbital particle collector. Even though continued exposure to cosmic rays kills normal brain cells, Dauoi correctly postulated that the negative-charged Zeta energy would have the reverse effect on dead brain matter. However, something went severely wrong: the reanimated cloned Squadron, imbued with the powers of the original Squadron, became voracious zombies. This was probably due to the refracting nature of Dr. Spectrum's Prism, in which the DNA constructs were unstable.

The zombie Squadron attacked and devoured Pegasus' personnel but were quickly contained inside the facility under a system lockdown by the surviving scientists. Desperate for sustenance, the Squadron tried to find a way to escape. The zombie Nuke had already gotten out during the carnage through a radioactive waste chute. The Squadron managed to obtain the facility's blueprints and learned that only the zombie Hyperion could escape by going through the Earth's core via a magma pool . The Squadron also came into conflict with a special ops team that came to investigate Project Pegasus.