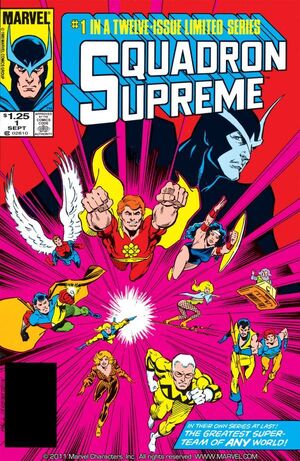 Citizens of America and all nations, do not panic. We, the Squadron Supreme of America, hereby assume supreme authority in all matters pertaining to world security and survival for the duration of this critical transition back to peacetime. ... We are the world's best hope.

Appearing in "The Utopia Principle"Edit

Synopsis for "The Utopia Principle"Edit

In Earth-712's orbit, Hyperion desperately brings down the remains of the Squadron Supreme's former satellite base into the atmosphere, as it starts to burn up. He brings it down into the ocean, where some of his colleagues join him to tow it back to land. That done, they go to rendezvous with the rest of their teammates.

Near Niagara, Power Princess, Nuke, Arcanna, and Cap'n Hawk witness a crowd of citizens looting a crashed food truck. When they realize the citizens are starving and just want to feed their families, however, they decide to let them continue, but the heroes come under fire from the army for helping the looters. Nuke melts their guns and blows up their jeep, and the heroes leave.

Meanwhile, Nighthawk, Golden Archer, Lady Lark, and Tom Thumb fly over the midwest, but stop to deal with a fire at a natural gas plant. Tom Thumb barely escapes with his life. They return to the Squadron's temporary headquarters in the mountains of Moreland, and discuss the situation the country faces after the Overmind took control of them and devastated the country, and the rest of the world. Inspired by Power Princess' tales of her home, Utopia Isle and its ideals, the Squadron decide to take over the running of the country and create a new Utopia. They hold a vote, and it passes by a majority - both Nighthawk and Amphibian vote against. Amphibian goes along with the majority, despite his own reservations, but Nighthawk resigns from the Squadron. The Squadron decide to unmask on TV when they announce their plans, and go their separate ways to tell their loved ones.

Hyperion goes to tell his girlfriend Lonni that he's abandoning his dual identity and that, as he's an alien, there is no future in their relationship. She angrily tells him to leave. Doctor Spectrum goes to his bachelor pad to hook up with one of the women in his little black book, while Captain Hawk goes to see his mother, only to find his father the American Eagle has died, and left him a new costume. Power Princess reunites with her now elderly husband Howard, and Amphibian goes to see his dolphin friends. The Archer and Lady Lark go and see her trashed apartment, and he avoids telling her when he finds a dead looter in there. Nuke goes to see his parents, who are both in hospital with terminal cancer, while Arcanna goes to see her own family, who have been protected by an illusion she cast. Tom Thumb goes over the remains of the satellite, and finds AIDA, who he promises to repair. At his own home, Nighthawk gets back into his old costume, and takes a call from his Presidential aide, who he tells he wishes to hold a press conference the following day. He's interrupted by a knock on the window - Hyperion has come to see him to remind him they're friends and to say they should hold a joint press conference. Nighthawk sends him away, and realizes he is the only one who can stop the Squadron. He creates a bullet from Argonite - the only substance that can kill Hyperion, and wonders if he can go through with killing him.

The next day at the press conference, Richmond apologizes for what happened under the Overmind's control, and resigns as President. Hyperion takes over at the microphone to detail the Squadron's plans, and Nighthawk tries to shoot him, but can't go through with it. As Hyperion promises that the Utopia Program will usher in a new era of trust, friendship and unity, he and the other Squadroners unmask, while Nighthawk thinks to himself that he will find another way to stop them.

Retrieved from "https://heykidscomics.fandom.com/wiki/Squadron_Supreme_Vol_1_1?oldid=1454277"
Community content is available under CC-BY-SA unless otherwise noted.