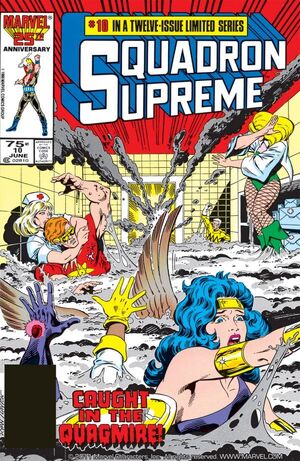 These Hibermedics will retrieve you, no matter where you are, and place you in a Hibernaculum. In the Future, when we or our Successors find a way to cure your cause of Death, you will be revived! Plans are currently being made to build huge Hibernacles, depositories for the Hibernacula, in every major City in the U.S.... A Prototype has been built here in Squadron City, and one is under Construction in the Nation's Capital. Tom Thumb, the Principal Architect of this bold Venture into Life Extension, is dead, but thanks to the Technology he has created, he will be back someday!

Appearing in "The Dark From Within"Edit

Synopsis for "The Dark From Within"Edit

The Squadron watch over the dead Tom Thumb in his Hibernaculum, while a news report pays tribute to Tom and his inventions. Power Princess announces on the news the introduction of the Hibernacula, to freeze the dead to be brought back when the diseases they died from a curable. Watching the news, the Redeemers especially Nighthawk, are incensed, and discuss how they will defeat the Squadron.

Meanwhile, the Squadron undertake various work assignments. Power Princess and Arcanna fly to the American Medical Association to brief them on the Hibernacula, and Arcanna wonders how Zarda would react if she knew her pregnancy is much further along than she's admitting, as she's hiding it with her illusions. Ape X starts working on a robot replica of Tom Thumb.

In the hospital complex, Dr. Decibel checks on the comatose Quagmire, and is shocked to see that mind has started to let his darkforce matter seep out into the world. Realizing it may never stop, the doctor tries to wake him up.

Whizzer and Shape are at a civil servicde office recruiting Hibernacula staff when two costumed individuals, Moonglow and Redstone (secretly members of the Redeemers) enter, saying they want to join the Squadron. Whizzer gets them to demonstrate their powers, before taking them, blindfolded, to see the Squadron. Moonglow uses her illusory powers to make it seem like she's blindfolded when she isn't. On the news, Nighthawk and Black Archer happily see that the first of their recruits have infiltrated the Squadron.

In the meeting room, the Squadron debate whether to induct the two applicants, and Blue Eagle suggests behavior-modifying them beforehand, but is outvoted on that. They agree to induct the pair, and to implement a recruitment program, but are interrupted by a transmission from Dr. Decibel, who calls from the hospital urgently needing help.

The rest of the Squadron fly to the hospital to find it overflowing with Quagmire's tar-like darkforce. Whizzer, Doctor Spectrum and Hyperion go inside to evacuate patients and staff, while Arcanna, Foxfire and Lamprey try to use their various powers to stop the flow, to no avail. Power Princess sends them to evacuate the area, while Whizzer and Spectrum create a dam. Power Princess and Hyperion realize the only way to stop it is to swim through the flood and disconnect Quagmire's life support. Hyperion volunteers as he does not need to breathe, and his radar glasses allow him to see through the flood. He swims to Quagmire's side and sees Decibel dead next to him, and unplugs the machine. The darkforce, as well as Quagmire himself, disappear. Hyperion carries Decibel out to be taken to the Hibernacle and the Squadron reason that Quagmire was sucked through the portal he created to access the darkforce.

Though Quagmire appeared to have been killed, he was actually transported to Earth-616.

Retrieved from "https://heykidscomics.fandom.com/wiki/Squadron_Supreme_Vol_1_10?oldid=1454287"
Community content is available under CC-BY-SA unless otherwise noted.