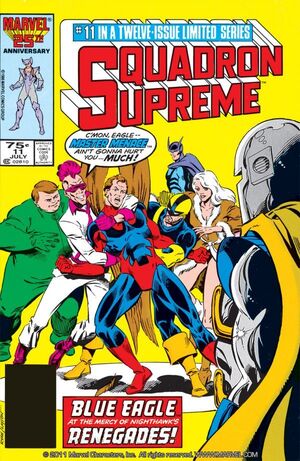 It doesn't matter if this crime I'm participating in is only a small one, a temporary one. It is still a crime against human rights, against free will. Somehow I feel as if I've lost the war right here and now - that by selling out my principles I've rendered our fight meaningless.

The Squadron and their new recruits train in the desert outside of Squadron City, and Moonglow secretly uses her illusory powers to win. Whizzer then tells them there'll be a public address later that day.

In their office Power Princess confides in Hyperion that she thinks the Utopia Program has cost them a lot so far - four of the Squadron have died since its inception, and four have left their ranks - but Hyperion reassures her that they're doing the right thing.

Later, the five new recruits are sworn in to the Squadron, all feeling bad about lying as they are actually double agents for the Redeemers. Nighthawk and the rest of the Redeemers watch their fellows being sworn in on TV, with the Mink, Remnant, Pinball and Black Archer complaining they haven't seen any action. Nighthawk assures them they will, before remembering how he came to set up the group. Mink approaches him afterward and thanks him for making a new woman of her, then kisses him, much to his surprise.

That night, Moonglow uses her new security clearance to access the Squadron's files and send the plans fot the Behaviour Modification Device to Nighthawk. She's almost seen by Ape X, but uses her illusory powers to hide herself. Nighthawk sends the plans to Master Menace so he can recreate the devide and reverse-engineer it to find a reversal process.

Meanwhile, AIDA alerts Ape X that Moonglow stole the plans, but as a result of her own behavior-modification, Ape X is unable to report a fellow Squadron member, as Moonglow now is. The resulting mental distress the dilemma Ape X faces renders her catatonic. AIDA alerts Power Princess and Hyperion, but when they arrive, AIDA is fearful of telling them what happened in case they have a similar reaction, so she stays silent about it. The two heroes fly Ape X to the hospital, thinking she's suffering from exhaustion or an anxiety attack.

After an assignment with the Whizzer, Haywire lures Lamprey to a disused bar where the rest of the Redeemers are waiting to reverse his behavior-modification. That done, they recruit him to the Redeemers to be another inside agent.

Days later, Shape is also lured there, and deprogrammed, but Blue Eagle had followed the Redeemers who brought him in, before being captured himself. After wrestling with his moral convictions, Nighthawk agrees to have Blue Eagle behavior-modified to forget what he's seen, but as the process starts, he feels like he's sold his soul.

Nighthawk compromises his own principles to behavior-modify Blue Eagle so that he forgets about coming across the Redeemers' plotting.

Retrieved from "https://heykidscomics.fandom.com/wiki/Squadron_Supreme_Vol_1_11?oldid=1454288"
Community content is available under CC-BY-SA unless otherwise noted.