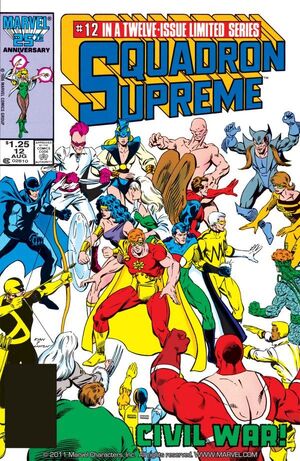 There was a danger in calling ourselves the Squadron Supreme. We began to believe that we always knew what we were doing... That our noble Ends justified our ignoble means. Before he died, Nighthawk made me see that in our haste to save the World, we never considered the longrange consequences of our deeds. Ours is a precarious Utopia, built with the most dangerous tools yet devised. We dare not make Society dependent upon them. I hereby move we disband the Squadron Supreme, and dismantle the system we instituted.

Appearing in "The Dregs of Victory"Edit

Synopsis for "The Dregs of Victory"Edit

Foxfire is strapped into a Behaviour Modification Device, having her behavior modification reversed by Nighthawk and Master Menace, while other Redeemers look on. When the process is done, Nighthawk apologizes for using force and introduces his team to her, explaining their goal in stopping the Squadron Supreme's Utopia Program. Nighthawk invites Foxfire to join their cause, and she agrees. Lamprey flies Foxfire back to the Squadron before they miss her. Meanwhile, Nighthawk tries to persuade Master Menace to join their cause properly, but he declines, as their methods and morality are so different. Menace leaves, and after some arguments, the other Redeemers pledge their loyalty to Nighthawk.

Flying back to Squadron City, Lamprey and Foxfire see a crime in progress, but as they have had their behavior modification reversed, they decide not to bother intervening. At Squadron City, Whizzer and his wife Maddie have Doctor Spectrum over for breakfast, and he tells them about his burgeoning relationship with Foxfire before the two Squadroners go to assemble with the rest of the team.

In the city's medical complex, Shape, confused since his behavior-modification reversal and because of his mental impairment, tries to talk to the catatonic Ape X about who his friends are. A watching Moonglow uses her illusion-casting ability to make Shape think Ape X is talking to him, telling him to trust the Redeemers, not the Squadron. Elsewhere in the complex, Arcanna and her husband talk to her obstetrician about the impending birth of her fourth child. The doctor advises Arcanna against travelling in her condition, but Arcanna wants to attend an important Squadron affair. Disguising her pregnant condition using an illusion, as she has been for months, Arcanna leaves to rejoin the Squadron.

At the airfield, as he loads the dead Tom Thumb in his cryogenic tube into a Squadron aircar, Redstone is approached by Blue Eagle, who tries to befriend him. Redstone plays along, but thinks to himself that today is the day Nighthawk has given for the Redeemers to make their move against the Squadron. Elsewhere, the undercover Redeemers Haywire and Inertia make out in a jacuzzi and discuss their fears about the impending confrontation. They're interrupted however by Thermite, who plays a prank on Haywire by freezing the water as he gets out of it.

At the White House, Power Princess addresses the cabinet about the Squadron's decision to hand back some of the reins of government back to them. Leaving with Hyperion, the two of them fly off, stopping to kiss in the clouds and talk about getting married and having children. Later, they're joined by the rest of the Squadron at the nation's first Hibernacle, where Power Princess gives a speech about the Squadron's aims, despite a protest in the watching crowd. Former Squadron member Lady Lark watches in disguise from the crowd and slips away, though she is seen on television by her former love the Black Archer, who flies with some of the other Redeemers in their helicopter toward Squadron City.

The Squadron land in their aircars on the city's airfield, only to be greeted by the sight of the Redeemers' helicopter, along with Nighthawk, Black Archer, Mink, Pinball, and Remnant. Nighthawk voices his opposition to the Squadron and demands they surrender. Power Princess points out the Redeemers are outnumbered 14 to 5, but Nighthawk says on the contrary, it's the Squadron who are outnumbered, as the infiltrators show their true colours, and it becomes clear the Squadron are outnumbered 13 to 6. Realizing the Squadron are in trouble, but not wanting to fight, Doctor Spectrum uses his Power Prism to make solid energy restraints emerge from the ground and restrain the Redeemers so they can overpower them. Power Princess charges at Inertia, but Inertia redirects Whizzer's inertia to Zarda, making her knock over Spectrum, breaking his concentration. With the restraints gone, the battle begins in earnest.

Hyperion tries to reason with Nighthawk, but Redstone takes advantage of his distraction to hit him from behind, dazing him and knocking his radar goggles off, blinding him. Lamprey tries to divebomb Hyperion and siphon his power, but Hyperion fends him off with a piece of wreckage. Mink and Foxfire chase the pregnant Arcanna, while Haywire and Thermite team up against Whizzer. Haywire manages to trip the speedster, but the Whizzer collides with Thermite's regulator pack, killing him.

Arcanna summons a gust of wind to blow Mink and Foxfire away, but Moonglow apparently lands in front of her, blocking her way. Arcanna sends a mystical bolt toward her, but it passes right through as she doesn't realize Moonglow is casting an illusion of herself. Moonglow says she will make gravity five times stronger around Arcanna, crushing her to the ground. Arcanna is affected, not realizing this is also an illusion. Arcanna pleads that she's about to go into labor, but Moonglow doesn't believe her.

Meanwhile, Hyperion tries to slug it out with Redstone, not realizing Inertia is redirecting the force of his blows at Power Princess. Zarda manages to take three of these punches before getting knocked out. As Inertia walks over to her to check if she's dead, Doctor Spectrum hits Inertia with a beam of force, taking her out of the fight. Flying to help Blue Eagle against Remnant, Spectrum is stopped by an explosive arrow fired by his former friend the Black Archer. Spectrum pleads with him and the two reach a stand-off, each of them not wanting to shoot first, until the Archer looses an arrow at Spectrum. Remembering that he killed his friend Nuke accidentally in battle, Spectrum doesn't react, and the arrow hits his Power Prism, shattering it. The fragments embed themselves in him and his whole body turns white as he falls to Earth. The Archer is shocked and manages to catch Spectrum, but doesn't see Blue Eagle, who brutally clubs him over the head from behind with his mace.

Shape approaches Moonglow as she gloats over Arcanna's predicament and says that Arcanna's his friend. While Moonglow's distracted, Arcanna crawls out of the area of supposedly increased gravity while leaving an illusory after-image of herself behind. Sneaking up behind Moonglow, Arcanna taps her on the shoulder, then decks her with a single punch. In too much pain to keep up her illusion of not being pregnant, Arcanna asks Shape to take her to the hospital so she can have her baby. Shape agrees and takes her away, noticing as he goes that Moonglow now looks overweight and ugly - her formerly good-looking, slim appearance was only an illusion.

While Redstone grapples with Hyperion, Lamprey siphons off Hyperion's strength, then attacks Blue Eagle, while Foxfire goes to Spectrum's aid and tells him how much she loves him. Lamprey leeches the energy from Blue Eagle's wings, and gleefully watches him plummet toward the ground. Blue Eagle tries to glide on his powerless wings and aims for the one soft object below - the unconscious Pinball in his inflatable suit. Remnant tries to stop him, but Blue Eagle hits Pinball, critically injuring them both.

With the Squadron defeated and only Arcanna escaped, Nighthawk tells the powerless Hyperion how the Redeemers will dismantle the Squadron's Utopia Program. Meanwhile, Foxfire tells Spectrum she's going to prove that she's the Squadron's ace in the hole, and runs over to where Nighthawk is telling Hyperion about the problems with the Utopia Program, and gets Nighthawk's attention before using her disintegration power to weaken his heart muscles, killing him. Foxfire runs back to Spectrum and tells him what she did. Before she can continue, however, she chokes in pain - Mink has fatally stabbed her in the back with her claws. Angry, Spectrum cries out and his body projects an energy beam, knocking Mink out - the fragments of the Power Prism embedded in him still have power. He starts to fly Foxfire to a hospital but Lamprey gets in his way, seeking to drain Spectrum's power. Spectrum projects more energy than Lamprey can take, and Lamprey explodes. Back at the airfield, the survivors of the battle gather the dead bodies of their comrades, and Hyperion surrenders on behalf of the Squadron Supreme.

At the hospital complex, the survivors mourn the dead in the morgue - Nighthawk, Foxfire, Blue Eagle, Pinball, Black Archer, Thermite and Lamprey - while in the maternity wing, Arcanna, her family and Shape welcome her new baby, Benjamin, while in the morgue Hyperion disbands the Squadron and says they'll dismantle the Utopia Program.

Retrieved from "https://heykidscomics.fandom.com/wiki/Squadron_Supreme_Vol_1_12?oldid=1454289"
Community content is available under CC-BY-SA unless otherwise noted.