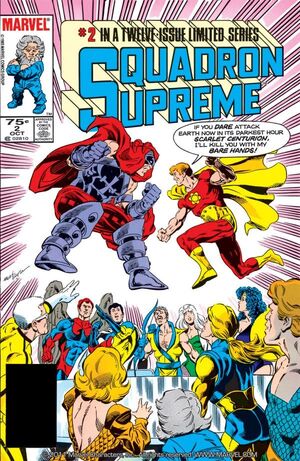 Sorry, but I can't give you the credit, Bozo... My Prism only responds to one man, yours truly!

Appearing in "A Small Sacrifice"Edit

Synopsis for "A Small Sacrifice"Edit

Over central Sigmund, Doctor Spectrum, Golden Archer and Tom Thumb deliver food supplies to the populace. While they do so, Tom starts to feel increasingly marginalized. After Spectrum and the Archer give speeches, a group of men posing as councilmen hold the mayor at gunpoint. They make the Archer and Spectrum drop their bow and Power Prism respectively. The men make the Squadroners line up to be shot, but Spectrum takes control of his Prism remotely and uses it to disarm the men before he and the Archer subdue them. Tom meanwhile is overlooked throughout.

Meanwhile, Nuke goes to see his terminally ill parents in hospital and is shocked to hear they're dying of radiation poisoning, realizing it's his power that caused it.

Later, Nuke is absent from a Squadron meeting where the team discuss their progress in getting the country back on its feet. They're interrupted by a projection of the Scarlet Centurion, who taunts them that with their world on the brink of collapse, he will invade and take it over. A furious Hyperion promises him that if he tries to invade again, instead of letting him retreat to his own timeline again, that he'll kill him with his bare hands. Amused but clearly shaken, Scarlet Centurion decides conquering a ruined world isn't worth the trouble.

Afterwards, most of the Squadron play poker, but Tom is sidelined again. Later in his lab, Tom is visited by Nuke, who asks him if he'll test his power levels to see if they're increasing. Tom does, and finds they've increased by nearly half in the last year. Nuke tearfully confides in Tom that he's caused his parents' cancer, and begs Tom to find a cure for the disease. Not knowing what to do, Tom says he'll do what he can, and begin frantically researching all the cancer data he can find, and asks to be relieved of field assignments, depriving himself of sleep so he can work all hours.

Lady Lark, Blue Eagle, and Nuke supervise food deliveries, when the deliveries are waylaid by angry mobs. Nuke overzealously scares them off with a cloud of fallout, and has to be subdued by Lady Lark.

Nuke goes to see Tom, who's made him a containment suit, but Nuke says that isn't what he wanted - he wanted his parents cured. Tom works all hours of the day to find a cure, but realizes he doesn't have enough time. Tom decides that time is the answer and uses the Transtemporal Somaprojector to travel to the Scarlet Centurion's time to find a cure for cancer there. Meeting with the Centurion, he tells him he'll give anything, even his life, for the cure. The Centurion says he will give Tom the cure if Tom sprinkles Argonite in Hyperion's food to weaken him enough for the Centurion to be able to kill him. Tom says he can't do it and returns to his own time.

Nuke goes to see Tom and Tom admits he can't cure cancer. Nuke is incensed and tells Tom that when his parents die it'll be Tom's fault and he'll kill him for it. Nuke flies angrily away, so doesn't hear Tom say that while doing his research he discovered he's dying of cancer too.

Retrieved from "https://heykidscomics.fandom.com/wiki/Squadron_Supreme_Vol_1_2?oldid=1454278"
Community content is available under CC-BY-SA unless otherwise noted.