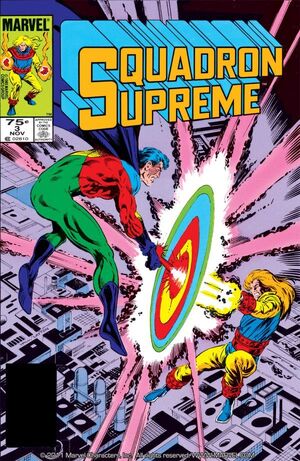 You see, not everyone is as strong or fast as me - or carries a bullet-proof Shield... But everyone deserves to be as free from the Fear of Guns and other lethal Weapons as I am! That's why the Squadron Supreme, in conjunction with the new Political Administration, has been hard at work finding Ways to make the World a safer Place!

Power Princess records a public service announcement for the gun control element of the Squadron Supreme's Utopia Program, watched by Doctor Spectrum. Once the commercial is recorded, Spectrum decides that she takes herself too seriously and decides to take her down a peg, sending out an energy tendril from his Power Prism to cut the strap on her leotard. Power Princess' top falls down, exposing her breasts to the film crew, much to Spectrum's amusement. An unamused Zarda asks Spectrum how he'd feel if she divested him of his pants, before taking his cloak to cover herself with. Duly covered, Zarda takes a video call from the President and discusses the gun control program with him, before flying off to see her husband, Howard.

At the Squadron's mountain headquarters, Spectrum regales Whizzer and Golden Archer with the story of Zarda's wardrobe malfunction when she arrives unexpectedly and walks past them, ignoring them. Afterwards at a Squadron meeting, Zarda doesn't tell on Spectrum. The team then discuss Nuke, who has missed 28 meetings and who they haven't had time to look for. Tom Thumb feels he cannot tell the others what he knows - that Nuke stormed off, furious when Tom admitted he couldn't cure the cancer Nuke's parents are dying off due to their proximity to Nuke's power. At first, Whizzer volunteers to look for Nuke, but then Zarda volunteers Spectrum, as he had socialized with Nuke a couple of times. A resentful Spectrum realizes this is Zarda's revenge for his practical joke. Spectrum leaves to begin the search and Tom tells him to check the hospitals.

Back at headquarters, Whizzer, Arcanna, and Amphibian are called away to a riot at a gun factory in Alamo Town, Olmstead.

In Nuke's hometown, Spectrum visits the hospital and finds out Nuke's parents have both died. Getting their address from a nurse, he flies there.

In a Squadron aircar, Whizzer, Arcanna, and Amphibian see the riot below them, and Whizzer and Arcanna jump out, Arcanna creating an updraft to guide them down while Whizzer catches the hail of bullets that are fired at them. Once on the ground, Whizzer disarms many of the rioters in a flash, while Arcanna whips the guns out of some others' hands with gale-force winds. Pinning one of the rioters to a fence with mystical energy, she asks him why they're rioting, and he says they can't trust the authorities and don't have powers to protect them. The two Squadroners build a pile of the rioters' guns to be destroyed.

Spectrum visits Nuke's little brother Scotty at his foster parents' and reveals his brother's secret identity to him. Spectrum asks Scotty if he knows where his brother is, and Scotty says he'll tell him if Spectrum takes him flying. Spectrum flies Scotty to the cemetery his parents are buried in, and they see Nuke crying by their grave and looking haggard. When Scotty runs toward him, Nuke is incensed with Spectrum for bringing Scotty there, and says the Squadron are responsible for his parents' deaths, especially Tom Thumb. When Spectrum starts to question him, Nuke causes an explosion and then threatens to go and kill Tom Thumb and flies off. spectrum drops Scotty off at his foster parents' place, and goes after Nuke, following his vapor trail.

Spectrum catches up with Nuke and encases him in an energy bubble, but Nuke breaks out of it. Then Spectrum tries to knock Nuke out with an energy blast, but Nuke matches his attack, trying to overwhelm him. Realizing Nuke is more powerful, Spectrum wraps him in energy tendrils, then surrounds him in another bubble. Nuke keeps blasting, so Spectrum makes the bubble thicker and thicker. Eventually, Spectrum can't feel the blasts anymore, and opens the bubble to reveal a lifeless Nuke. Realizing Nuke burned up the air inside the bubble, Spectrum tries to give him CPR, but fails. After a brief panic, Spectrum decides to take the dead Nuke back to Squadron headquarters. Once there, he breaks down, but Zarda tells him she understands he did what he had to.

Two days later, Spectrum goes to tell Scotty what happened to his brother. Scotty says Nuke wasn't a very good superhero, but Spectrum assures him he was and asks him to forgive him, which Scotty does.

Retrieved from "https://heykidscomics.fandom.com/wiki/Squadron_Supreme_Vol_1_3?oldid=1454279"
Community content is available under CC-BY-SA unless otherwise noted.