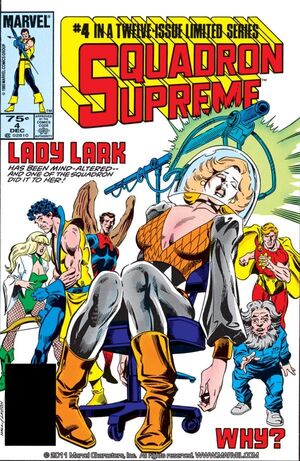 Watch yourself, Lady. Don't want to make it too obvious you're falling for him.

Appearing in "Change of Heart"Edit

Synopsis for "Change of Heart"Edit

The Squadron battle the soldiers at an army base who resent the Squadron disassembling the military as oart of their Utopia Program. Thought they face great numbers, the Squadron prevail, partly thanks to the bulletproof force-field belts Tom Thumb has invented. During the battle, Lady Lark realizes she's falling for Blue Eagle.

Afterwards, Golden Archer and Whizzer visit Doctor Spectrum, who still coming to terms with his part in the death of Nuke. The Archer tells Spectrum afterwards that he's planning on proposing to Lady Lark.

Later that night, at a meeting of the Squadron, Tom Thumb unveils his latest invention - the Behaviour Modification Device, a machine that deprograms criminals from committing crimes. Amphibian protests that the machine will take away free will, but when the matter is put to a vote, it is only he and Arcanna who abstain. Amphibian goes off for a swim, doubting whether he wants to remain with the team.

Outside, the Archer proposes to Lady Lark, but she is shocked and says she'll sleep on it. Lady Lark wakes up Arcanna and asks her advice, saying she doesn't love the Archer. Arcanna advises her to let him down gently but firmly. Arcanna thinks about telling her she's pregnant, but decides against it. Lady Lark finds the Archer and tells him she can't marry him, but he gets angry and becomes convinced she's been seeing Blue Eagle on the side.

The Archer goes to Tom Thumb and asks him to show him how the B-Mod machine works, and Tom shows him, but is suspicious about why he's showing an interest. Once the rest of the Squadron are asleep, the Archer drugs Lady Lark with some sedative gas, carries her to the machine and uses it on her to make her love him unquestionably.

In the morning, Lady Lark rushes to the Archer and says she wants to marry him right away. They kiss as the others look on, with Arcanna and Blue Eagle looking particularly shocked.

Retrieved from "https://heykidscomics.fandom.com/wiki/Squadron_Supreme_Vol_1_4?oldid=1454280"
Community content is available under CC-BY-SA unless otherwise noted.