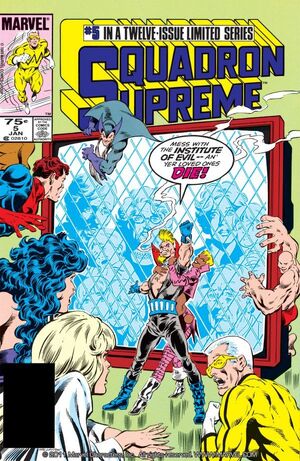 If Maddy and Tina are... still alive, there'll be no way the Institute can harm them once they're all dead!

The Golden Archer has been captured by the Institute of Evil. Using one of Doctor Decibel's sonic devices, they compel him to tell them everything about the Squadron Supreme - the location of their headquarters, their security codes, their secret identities, and the names and whereabouts of their loved ones.

Meanwhile, the Squadron continue with their Utopia Program, with Hyperion and Arcanna behavior-modifying prison inmates.

Back at their headquarters, Ape X gives her teammates their assignments, with each of them assigned to abduct different Squadron members' relatives.

At the Squadron's base, they discuss the Golden Archer's disappearance, and Doctor Spectrum is assigned to search for him, despite his misgivings after feeling responsibel for the death of his friend Nuke. Talking about the increased workload caused by their Utopia Program, Hyperion cancels all leave for the team, much to the consternation of parents Whizzer and Arcanna, and the 'landsick' Amphibian.

The cancer-suffering Tom Thumb remains behind at the Squadron's base, talking to his artificial intelligence computer AIDA when an intruder alert sounds and the security monitors black out. Taking a force-field belt and an experimental neuro-scrambler gun, Tom goes to investigate. He finds the Institute esconced in the meeting room. Attacking them, he is disarmed by Doctor Decibel's mega-sonic blast, and Lamprey absorbs his force field. When Tom tries to slip away, Quagmire disables him using his slime. However, AIDA alerts the rest of the Squadron.

As some of the Institute vandalise the headquarters, Doctor Decibel behavior-modifies Tom to turn against the Squadron. Arcanna, Doctor Spectrum, Blue Eagle and Lady Lark arrive and battle the Institute, but surrender when they see their captured loved ones. The Institute take them away to be behavior modified.

Whizzer and Hyperion arrives separately, but Hyperion is quickly drained of his powers by Lamprey. Spectrum warns Whizzer that the Institute have his wife and daughter, and panicking, Whizzer runs away to make sure it isn't a trick. Running back to his home, Whizzer realizes he can phone home to check instead, and, speaking to a neighbor, realizes they have indeed been taken. Running to the nearest police station, he takes a machine gun from their impounded weapons store and runs back to Squadron headquarters. Gaining entry via Amphibian's secret tunnel, Whizzer confronts the Institute and shots at them, but the bullets are blocked by his Squadron teammates. Whizzer is disgusted by them, but is soon struck down by Doctor Decibel and Lady Lark's sonic powers. They behavior-modify Whizzer too.

The Institute and Squadron members travel as one to the Institute's base in the Squadron's aircars, where the hostages are being held. The Institute smugly welcome the Squadron to their ranks, but are shocked when Hyperion gives the order to attack. Amphibian and Power Princess deck Lamprey, while Spectrum traps Shape in a force field. Blue Eagle kicks Quagmire into unconsciousness, while Whizzer disarms Doctor Decibel and Tom Thumb tackles him. Lady Lark knocks Ape X out of her wheelchair with a sonic scream, while Arcanna blasts Foxfire through a fence with a mystical bolt. With the Institute defeated, the Squadron free their loved ones, and Tom Thumb reveals that he'd installed a failsafe in the behavior-modification device to ensure it would not work on the Squadron (but thinks to himself that he only did so after it was misused by Golden Archer). Hyperion congratulates Spectrum on getting over his aversion to fighting, before Whizzer apologises for running off and nearly ruining everything, but Hyperion assures him it's okay. Whizzer wonders to himself, however, if the Squadron will fully trust him again.

Retrieved from "https://heykidscomics.fandom.com/wiki/Squadron_Supreme_Vol_1_5?oldid=1454282"
Community content is available under CC-BY-SA unless otherwise noted.