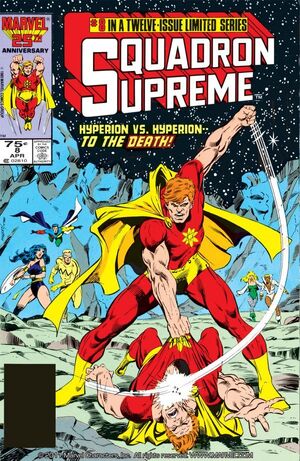 As he races to the site of a bank robbery, the Whizzer muses over the fact that he hasn't seen much action lately. Arriving on the scene, he finds two of his personal foes Bollix and the Rustler absconding with their ill-gotten gains. When he tries to tackle them, he rebounds off and realizes they're using the force-field belts that Tom Thumb invented for civilians' protection. However, Whizzer dribbles the two villains inside their forcefields like basketballs to the nearest police station. However, the two criminals gloat that the police cannot get past their forcefields to take their swag or use the Behaviour Modification Device on them, until the Whizzer tells them the the belts' power packs burn out after 96 hours' constant use.

Meanwhile, Ape X, Quagmire, and Blue Eagle oversee operations at a factory producing the pacifier pellets that have replaced guns for law enforcement officials. When Quagmire hits on one of the female workers, Blue Eagle tells him to step outside, where he tells him he's letting down the Squadron and then slugs him. Quagmire goads him that he may as well kick him when he's down, as since Quagmire and his fellow Institute of Evil members were behavior-modified, he can't hit back. Blue Eagle flies off to work off his anger. When Eagle returns, he finds out there's been a gas escape at the plant, and Quagmire pulled 30 people to safety by himself, but was affected by the gas and is in a coma. Blue Eagle feels guilty for flying off, and for underestimating Quagmire, and offers to fly him to the hospital.

Back at Squadron City, Arcanna is being examined by Dr Decibel, who says she doesn't look pregnant at all, until she reveals she has been using her illusory powers to hide how heavily pregnant she is. Dr Decibel tells her he doesn't think it's wise for her to hide her pregnancy, but Arcanna over-rules him as Dr Decibel realizes that because of his behavior modification, he has to obey her despite his reservations.

Flying to Squadron City, Doctor Spectrum and Lamprey are joined by Hyperion, or rather the imposter masquerading as him. Lamprey suspects that Hyperion is not who he says he is, as his energy signature is different, but cannot even voice his suspicions thanks to his behavior modification.

Reaching Squadron City, the Hyperion imposter surprises Power Princess and makes out with her. When Foxfire walks in on them and Power Princess is embarrassed, thinking it will undermine her authority as leader of the team, but 'Hyperion' points out that Foxfire can't tell anyone because of her programming.

The scene is watched by the real Hyperion from the other dimension he has been sent to. He's incensed to see his double using his likeness to trick Power Princess. Hyperion flies as fast as he can to try and escape, but in the mists sees another figure - his arch-enemy Master Menace, who was also exiled to the trans-temporal dimension when he was double crossed by his former accomplice the Hyperion imposter. Without a power source, Master Menace cannot activate the controls in his armor to send himself back. Menace admits that Hyperion's atomic vision might work as a power source. Menace makes Hyperion promise that if they get back to Earth-712 that the Squadron will not behavior-modify him or abridge his freedom, while Hyperion makes Menace give his word that he will do nothing to interfere with the Squadron or its Utopia Program. Hyperion uses his atomic vision to power up Menace's armor and Menace tries to leave without him, but Hyperion holds onto him. The two men are return to Earth-712 in mid-air above Menace's lab. Hyperion lets Menace drop to the ground, knowing his armor will protect him, and turning his words back on him by saying he doesn't want to abridge his freedom.

Knowing the imposter has already killed Power Princess' husband, Hyperion flies to Squadron City, where he finds the Squadron in the midst of a meeting. Hyperion bursts through the ceiling and attacks his doppelganger, telling the rest of the Squadron that he is an imposter. He punches the imposter through the building and tells his teammates to leave them alone so he can deal with him. Power Princess is horrified that she has been romantically involved with an imposter. She orders the Squadron to split into teams and find them, and she and the other members who are able to fly leave to search for them. Power Princess asks Arcanna if it could be true, and Lamprey, now no longer unable to voice his suspicions as the man he suspected is not a Squadron member, says he thinks it is true.

The two Hyperions slug it out at President's Mountain, Earth-712's equivalent to Mount Rushmore. The imposter has the upper hand initially, being more used to going all-out in a fight. The real Hyperion starts to use his atomic vision, and the imposter matches his move, their eye beams meeting in the middle with a large discharge of energy. The rest of the Squadron see the energy glow and head in their direction, Power Princess asking Arcanna to conjure up a tailwind to help them on their way. Each Hyperion realizes he will have to kill the other to win, as the discharge heads closer to the imposter. The discharge reaches him, and the imposter's eyes burst. The real Hyperion, who has been blinded from the over-use of his power, starts to pummel him. Power Princess asks Lamprey to stop him, but Lamprey points out he has been behavior-modified not to drain a fellow Squadroner. Doctor Spectrum uses his Power Prism to hold Hyperion back, but is unable to do so for long. Power Princess tells him to back off, and cradles the fake Hyperion in her arms as he starts to disintegrate. He admits to killing her husband Howard, and asks her to forgive him before telling her he loves her and dying. The rest of the Squadron look on as Power Princess weeps and Arcanna comforts her friend.

Retrieved from "https://heykidscomics.fandom.com/wiki/Squadron_Supreme_Vol_1_8?oldid=1454285"
Community content is available under CC-BY-SA unless otherwise noted.